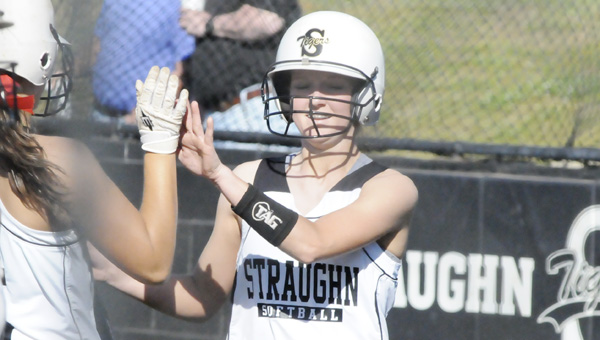 Straughn’s Laken Harris was 4-for-4 against Red Level Thursday at the annual KLD softball tournament at SHS. | Andrew Garner/Star-News

Both games ended with the same score of 10-0, and Straughn advances as the No. 1 seed going into Saturday’s single elimination play.

Andalusia, the No. 2 seed, beat Red Level 13-2 in six innings in the second game.

Paige Caraway struck out six, allowed one hit and one walk in four innings to earn the win for Straughn.

Wiggins came in to get the save for Straughn and had one strikeout.

Andalusia’s A.C. Riley was 1-for-2 with one single for the Lady Bulldogs.

Andalusia scored seven runs in the sixth inning, and Abbie Young was 4-for-5 with two singles, two doubles and four RBIs in the 11-run win over Red Level.

The Lady Bulldogs scored one run each in the second and third innings, and added four in the fourth inning before the seven-run spree in the sixth.

Dixon struck out 11, allowed two runs on one hit in six innings to get the win on the mound.

Red Level scored its two runs in the first inning on an error.

Straughn’s Payton Mitchell struck out seven and allowed one hit in five innings.

SHS accounted for 13 hits against Red Level in its first game of the day.