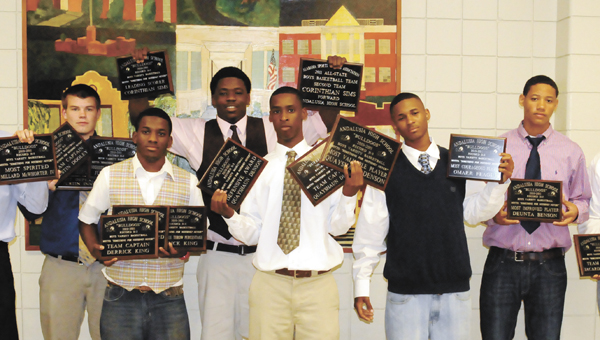 The boys and girls basketball teams, along with Andalusia’s cheerleaders were recognized from both the junior varsity and varsity squads, along with players from each grade.

Additionally, special awards were given to athletes that excelled during their sports’ respective season.

Andalusia’s Lady Bulldogs finished the 2010-11 season ranked No. 9 in Class 4A and finished with a 25-5 record. The Lady Bulldogs broke the 1988 team’s 18-win streak by winning 20 straight ball games.

AHS head girls basketball coach Bennie Shellhouse recognized each player on the team, the managers and scorekeepers, before presenting the special awards.

The managers were senior Callie Marie Crigger, and Kourtnee Woods. The scorekeepers were (for both the boys and girls team) Kristin Evans and Omarria McGee.

Andalusia’s boys varsity team finished as the Class 4A South Regional tournament runner up, and was ranked No. 2 in the state.

The Bulldogs won 31 ball games, the second most in school history for the program.

AHS head boys basketball coach Richard Robertson, who finished his 36th year as the head coach, recognized every player on the B-team and the varsity basketball team. Each player was presented a certificate of appreciation.

AHS cheerleader sponsor Charlotte Calhoun recognized the cheerleaders from both the junior varsity and varsity squads for their efforts during the football and basketball seasons.

Additionally, the seniors and individual awards were presented.

The seniors are Jamie Park, Anna Bay McCord and Maggie Casebier. Each received a plaque.

Abbie Young, who dawned the mascot suit for games was also recognized.

At the end of the banquet, special presentations were given to each basketball player, cheerleader and coach by the banquet committee.