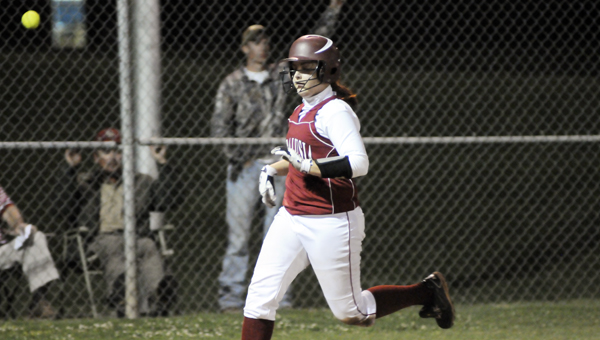 Andalusia’s Olivia Dixon along with the Lady Bulldogs’ defense held fifth-ranked Opp to no runs Tuesday night, and went on to beat the Lady Bobcats 7-0 at LBWCC.

Dixon pitched a two-hitter and had four strikeouts in seven innings to earn the win for the Lady Bulldogs.

AHS head softball coach Marcus Taylor said the win Tuesday night is a good example of how the girls approach each game.

“It just goes to show you how good these girls can be, and it also goes to show you that these girls haven’t given up, which is awesome,” Taylor said. “It was just a great job by everybody. I think the real story is Olivia’s pitching and our hitting. We’ve hit the best we’ve hit all year.”

Upcoming games for Andalusia and Opp are today at home against Pleasant Home for the Lady Bobcats, and on the road against Greenville for the Lady Bulldogs.

Andalusia got on board in the first inning on Ellie Pollock’s RBI single that scored Emily Terry. Pollock later came in on an error to help the Lady Bulldogs take the early 2-0 lead.

During the fourth inning, Andalusia’s Jessica Park hit a two-run double to score Kenna Edmondson and Megan Pugh. Park later scored in the inning on an error to help her team take a 5-0 lead.

“That kind of broke the game open for us,” Taylor said about Park’s two-run double.

In the fifth inning, Abbie Young and Edmondson scored on a single and an error.

The key inning for the Lady Bulldogs was the top of the sixth, where they held Opp to no hits, forcing pop ups to the first three hitters, Taylor said.

Opp’s Savannah Gerber and Courtney Mobley had one hit each for the Lady Bobcats.

“The girl pitched a real good game,” OHS head softball coach Jimmy Reeves said. “They made every play. They just whooped us — we’re not making any excuses. They just flat out came up there, and played a great game.”