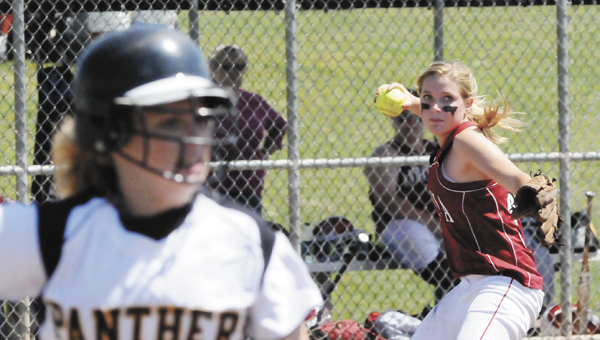 Andalusia’s Andi Hughes throws to first base during the Geneva game Saturday at the Andalusia Sports Complex. The Lady Bulldogs fell to Eufaula, Geneva and Opp on the second day of the Spring Fling tournament. | Andrew Garner/Star-News

Geneva hit back-to-back doubles in the top of the seventh to clear the bases, and beat Straughn 7-5 Saturday in the semifinals of the City of Andalusia’s annual Spring Fling fast pitch softball tournament at the sports complex.

After their 7-5 victory over the Lady Tigers (19-6), the Lady Panthers went on to beat Eufaula 1-0 in the tournament championship game.

“We made a couple of mental errors in the field, and the error or two (by Straughn) got bases loaded,” SHS head softball coach Ray Wilson said. “They got a big hit that cleared the bases on a double, and that was pretty much it.”

Straughn’s road to the semis after finishing as the No. 2 seed in Pool B included a 9-1 win over Brantley in the quarterfinals.

The Lady Tigers beat Leroy 5-2 in the morning game, and fell 3-2 to Headland to end pool play.

When asked how he thinks the team did overall Saturday, Wilson said the girls weren’t “happy.”

“We weren’t real happy with the way we played, and Geneva had a lot to do with that,” he said. “We came out a little flat against Headland. They got a big hit at the end.

“Then, we beat Brantley, and made a few mistakes against Geneva,” he said. “A good team like that will take advantage of that.”

Florala was put out of the tournament with an 11-3 loss to Leroy, and Andalusia was eliminated by Opp with a 4-1 loss to its rival. Opp later fell to Geneva 12-3 in the quarterfinals.

Caraway and Wiggins combined for eight strikeouts against the Lady Bears.

Wiggins was 3-for-4 with three singles and one RBI; and Taylor was 1-for-3 with an RBI to lead the Lady Tigers.

The Lady Rams scored two runs in the second off of two hits, and Straughn scored one run each in the fifth and sixth innings.

Headland sealed the win with a solo home run in the bottom of the sixth inning.

Eufaula scored one run each in the second, third, fifth and sixth innings to beat Andalusia.

Andalusia’s Emily Terry was 1-for-3 with a triple.

“On both days we left a ton of girls in scoring position,” Taylor said. “We do a good job of getting girls on, and moving them over.

“Like I tell the girls, ‘I like to bunt like anybody, but there comes a time where you have to hit,'” he said. “We’re just not hitting it right now.”

Jessica Park and Terry were 1-for-4 each with one run each; Ellie Pollock was 1-for-3 with one single; and Abbie Young was 2-for-3 with two singles.

“We came back and won one, and I was proud of that,” Reeves said. “I was proud of the come back to beat Andalusia. That was always nice. My senior pitcher, Sydney Jones, pitched great.”

The Lady Bulldogs scored one run in the first on an RBI single by Pollock.

Alma Caffy had a triple against Eufaula for the Lady Wildcats; Caffy added a single and Savannah Cassady had a double against Brantley; and Paige Irwin, Kendyl McDaniel, Cassady and Jessica Lindsey had a single each against Leroy. Additionally, Hillary Thames and Caffy had an RBI double each against the Lady Bears.

FHS head softball coach Jonathan Stinson said there is a lot of work that needs to be done.

“We’ve got to get back to the fundamentals,” Stinson said.

The Lady Wildcats cut it close against Leroy, cutting into the Lady Bears’ lead scoring two runs to trail 3-2.

However, the Lady Bears opened up their offense and outscored Florala by eight runs.

“We got it close to Leroy,” Stinson said. “We had that one bad inning that usually takes us out of it.”

Straughn fell 7-4 in the finals against Houston Academy, and beat Opp 9-8 in nine innings in the semifinals.