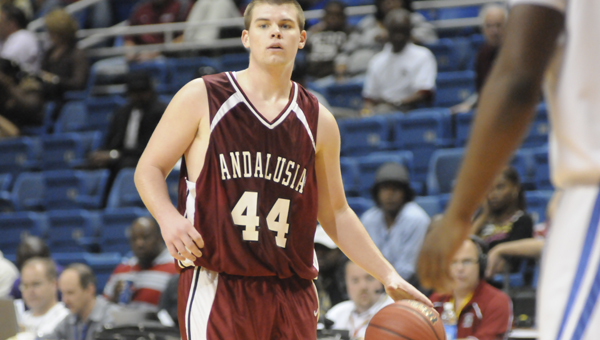 Andalusia’s Justin Dooley will play for the Hawks at Huntingdon College in Montgomery. | Andrew Garner/Star-News

After Andalusia ended its season at the Class 4A Regional Tournament in February, senior Justin Dooley decided he wasn’t done playing basketball.

Next year, Dooley will be joining the Division III Hawks basketball team at Huntingdon College in Montgomery.

When Dooley made his decision to play at the college level, his team suffered a devastating 68-57 loss to Hillcrest-Evergreen.

“I didn’t want to feel like that again,” Dooley said in an interview Monday afternoon.

Dooley finished his senior season at Andalusia with 194 points in 34 games, and enters a Division III program that won its conference title this year.

The players have the rings to prove it, Dooley said.

“They said, ‘it’s all business and we want to win another ring,'” he said about his visit to Huntingdon.

Dooley started playing basketball when he was 2 years old, after his dad Mark, set up a little basketball goal at his home in Boonville, Ind.

His first taste of winning a championship was in middle school, and added that’s where he caught the “bug.”

Mid-way through Dooley’s freshman year in high school, he moved to Andalusia, where he helped lead the Bulldogs to an 82-12 record in his three years at the school.

Dooley said the transition was a challenge because of the different styles of play.

“Up in Indiana, it’s really more fundamentally sound (basketball),” he said. “They’re really not the athletes you can find around here. It’s really more shooting, and taking care of the ball.

“Playing with (AHS head basketball) coach (Richard) Robertson, he’s not a fan of shooting the ball,” he said. “I adjusted to it, and starting playing how he wanted it done.”

But playing for Robertson is one of the many reasons Huntingdon head basketball coach Mike Pugh was interested in recruiting Dooley.

“We’re just thrilled to death to get somebody with his character and athletic ability, and as a student athlete, that’s what you’re looking for,” Pugh said. “We try to recruit players that have played for coaches like him (Robertson). Your job is done, if not partially over.”

Pugh said when Dooley gets the chance to play for his team, he’ll be more of a perimeter shooter for the Hawks, a skill the senior is known to have.

“For us, that’s what he’ll be a three point shooter,” he said. “We get up and down the court quickly, too. With us, he’s going to shoot the ball a lot more.

“You’ve got to have a skill,” he said. “He’ll shoot it from three. That’s important to us.”

When asked what the most important thing he learned while at AHS, Dooley said Robertson would always be there for the team, no matter what.

“No matter how much faith you have in your coach if you listen to him, most of the time he’ll come through for you, whether you think he’s wrong or right,” Dooley said. “It takes all five players on the court, not just one to make a team.”

Dooley said he plans on majoring in education, especially in history education, and has aspirations to one day coach a basketball team.

Dooley is the son of Mark and Shelly Dooley of Andalusia.

The Andalusia Lady Bulldogs won their first area game Monday night with an 8-6 victory over the Headland Rams at... read more