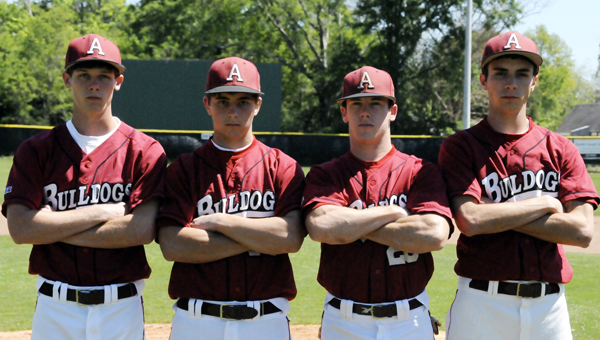 If you look into each of their eyes, you’ll see a focused and ready group of four Andalusia seniors.

Tonight, the Bulldogs will begin their area series against rival Straughn at SHS, in what Andalusia seniors Robert Woodall, Rob Maddox, Dilan Manring and Lee Miles call an important match up with possible playoff intentions.

If the Bulldogs win the series against Straughn, then there could be a three-way tie with Straughn and Headland.

The first pitch at Straughn tonight is slated to be at 5 p.m.

“This might be the first time ever that there could be a three way tie that we have to flip a coin for,” Woodall said.

“That’s what we think,” Maddox added. “We’re not 100 percent sure. We’re kind of wondering exactly how it’s all going to play out.”

All four say that the approach to their team’s games against Straughn this week has been the same, a “focused” approach.

“We’re just sticking to what (AHS head baseball) coach (Jonathan) Rasberry has told us all year,” Woodall said. ” That’s just having good approaches at the plate, and not making mental errors in the field.”

Above all, Andalusia playing as a team is a big key to success, Miles said.

“The main thing is that we’ve got to hit the ball,” Manring said. “If we hit the ball, then we’ll be all right. (Straughn pitcher) Zack Stinson threw a one-hitter against Headland, and we’ve got to come out (and hit well against him).”

This week, Andalusia defeated Carroll-Ozark Monday night before the rains and winds came.

The Bulldogs beat the Eagles 6-2 in what the four seniors called a good “boost” before the game tonight.

“I think that can be a good thing, and a bad thing because for them, they want to get the game cuts and really, that’s all they need,” Woodall said. “I think that win (against Carroll-Ozark) gave us a little boost going into this game.”

With rivalries comes one factor that gives it an extra special meaning. Both teams know each other well on the field.

Players from Andalusia and Straughn have played together for many years in the rec league and summer ball.

“We’ve played against them, and with them our whole lives,” Woodall said. “We know how they play. They know how we play.

“It’s really going to come down to who makes less errors,” he said. “Both teams will be coming to play hard.”

Most importantly, each says the team is peaking at the right time, and playing their best baseball right now.

Additionally, the four seniors know the team is the “under dog” going into the area series against the Tigers (21-4), which they don’t mind one bit.

And if they beat Straughn in this area series, the seniors said it would make their year.

“It would make the year,” Manring said. “Straughn’s pretty fired up for this game, too. They’re No. 2 right now in the state. For us to beat them, it would be like a total upset compared to what all the polls would say.”

Woodall, along with his senior teammates, said a win against their rival would be the “icing on the cake.”

“With their winning record, and being No. 2 in the state with 10 seniors, they’ll come with a chip on their shoulders and expect to blow us out,” Woodall said. “I don’t think we’re going to give that up. I think we’ll play hard for it. I think definitely, it’ll be the icing on the cake.”