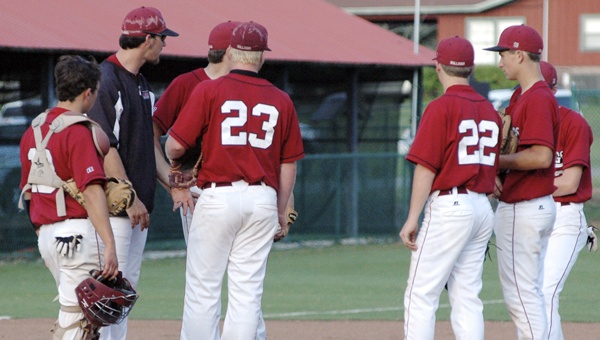 Andalusia split with Straughn in an area doubleheader Friday night, and the Bulldogs won the series over the Tigers in a tie breaker 2-1.

The Bulldogs bounced back from a 6-1 first game loss to the Tigers, and scored three runs in the bottom of the sixth inning in the second game to secure the series win.

After this series, top-ranked Straughn falls to 22-6 overall, and 5-2 in Class 4A, Area 3. The Tigers clinched the area championship after their series sweep against Headland last week, where they went 11 innings to beat the Rams 2-1 in game two. In game one, Straughn won 8-0.

Straughn will play the runner-up of Class 4A, Area 4 on Fri., April 22, in the first round of the Class 4A state playoffs at SHS.

Andalusia improves to 13-12 overall, and finished area play 4-4, having played the most games. The Bulldogs won two area series against Ashford and Straughn, both in tiebreakers.

Andalusia’s three runs in the bottom of the sixth inning came when Dilan Manring hit a two-run single, and Rob Maddox hit a ground ball to right to score the third run.

Quinton Maddox pitched a complete game, struck out three and allowed four hits and no runs.

“I’m just really proud to see him compete on the mound,” Rasberry said. “I thought we played good defense behind him.”

SHS baseball coach John Fussell didn’t have much to say after the 3-0 loss to Andalusia.

“I thought we played good defense, and hit the ball well at times,” Fussell said. We left too many men on base. I thought we pitched well, and that’s pretty much it.”

Andalusia’s Lee Miles stole second base, which set up Manring’s two-run single for the Bulldogs. Maddox’s RBI single came to fruition when the ball skipped hard off a Straughn player’s glove.

“It’s a pretty exciting game for our boys, especially after coming off the first game,” Rasberry said. “In the first game, (Josh) Dewrell did a good job of locating his pitches. It was exciting to get that win.”

Straughn’s Nick Allen was 1-for-4 with three RBIs and one double to help lead the Tigers.

After two scoreless innings, the Tigers got on the board in the third inning, scoring three runs on three hits.

Allen then hit a two-run double down the left field line to score courtesy runner Jacob Ganous and Fussell to give the Tigers a 3-0 lead.

In the fifth inning, the Tigers scored one run on an Allen put out, after Dewrell reached with a walk.

Straughn sealed the five-run win in the top of the sixth inning when Drew Jones hit a solo homer over left field, and Zack Turvin helped Zack Stinson score on a put out.

Andalusia scored one run in the bottom of the sixth on an RBI double from Quinton Maddox.

Brookshire, Watson to get Bryant-Jordan scholarships