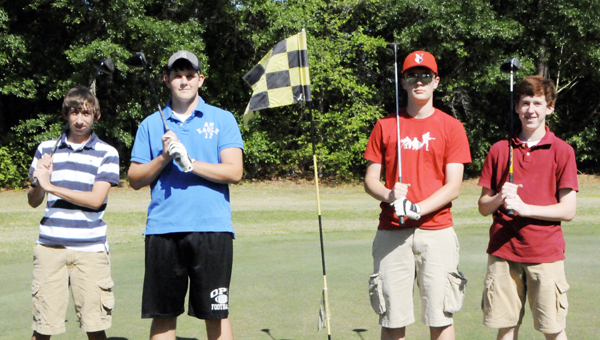 After two years off the course, the Opp Bobcats’ golf program is about to close out the first of what it hopes to be many seasons.

“Every day they’re getting better,” Gregory said. “I think the guys are getting really excited about the future of the program.”

Gregory said a couple players have even talked about getting lessons and joining a golf club to be a part of the golfing community.

The Bobcats golf team is comprised of two seniors, one sophomore and two freshmen.

The seniors are Justin Ferguson and Chris Johnson; the sophomore is Dillon Northey; and the freshmen are Tyler Thompson and Avery Stanfield.

The low man of the team is Ferguson, who Gregory said has been playing consistently this season.

“You can expect him to come out, and shoot pretty well,” she said.

The Bobcats have played in four matches this season, and improved by more than 36 strokes from the first match to the second match.

On April 5, Opp competed against Andalusia and Straughn at the Evans Barnes Golf Course at LBWCC, where Ferguson shot a 93 and Stanfield a 98.

Opp’s final match is next Thurs., April 21, at Evans Barnes because the Bobcats did not declare to play in the Class 3A sectional tournament.

“With it being the last match, I’m hoping they come out and stay focused, and really try to do their very best try to get their best lowest score of the season,” Gregory said.

Straughn’s baseball team stayed at the top spot in Class 4A, as the Alabama Sports Writers Association released its poll... read more