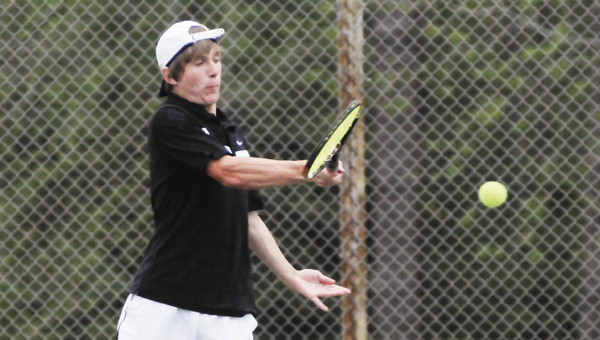 Andalusia’s Alex Evans returns a forehand during an earlier match this season. Evans, the No. 1 singles player, will try to help lead the Bulldogs to another state appearance today at the sectional tournament in Mobile. The boys and girls teams will begin at 9 a.m. at the Mobile Tennis Center. | Andrew Garner/Star-News

Andalusia’s boys and girls tennis teams enter today’s Class 4A sectional tournament in Mobile knowing one of the most important things in competitive sports — its opponents.

The Bulldogs will hit the courts against Jackson, W.S. Neal and Saraland, who make up their sectional, to vie for another state tournament appearance.

AHS head boys tennis coach Perry Dillard said the team, along with himself, are looking forward to the tournament because they know their opponents.

“We feel confident about playing those teams,” Dillard said. “The girls have done really well, and have beaten those teams 9-0 as well.

“So, we feel really good against those teams, and UMS boys and girls are always going to be good,” he said.

This will be the first time Andalusia will play UMS, and the top two teams from the sectional tournament advance to the state tournament.

The boys and girls teams practiced Sunday afternoon before making their journey down to Mobile for the tournament Monday night.

Dillard said after more than two months, he has everybody back from injury or illness.

“Mayur Patel, he had an abdominal hernia, and was out for two weeks,” he said. “He’ll be back for the sectional tournament.

“The flu bug ran through, and it’s been amazing that no matter who we plugged in to those vacant spots, the guys have played well,” he said. “The girls, they’ve been able to play their top six throughout, and I know they’ve gotten better this season.”

As Andalusia has had to deal with players being out this season, Dillard said he’s been impressed with how his freshmen have “stepped up” in their roles.

“I’m really proud of my freshmen — Jackson Moore, David May and Brandon Scruggs — they’ve really stepped up, and have been playing really well,” Dillard said.

“Alex has really worked hard this year,” Dillard said. “With Mayur and Chris, they’re always rock steady. Both of those guys play well under pressure.”

The boys and girls will begin sectional tournament play today at 9 a.m. at the Mobile Tennis Center.

Dillard said the teams are ready to get out there and play against the best competition.

“The guys have worked really hard,” he said. “We have really pushed ourselves. We’re excited about getting to the sectional tournament.

“We want to do really well and use it as a spring board to go to state,” he said.

With the game tied 3-3 in the top of the tenth inning, LBWCC’s Saints baseball team broke the game wide... read more