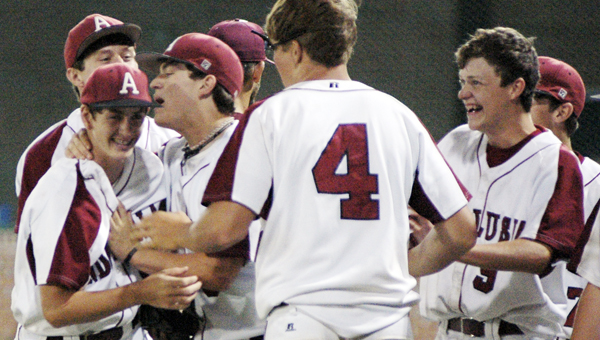 Ross Graham gets congratulated by his teammates Tuesday night after pitching 6.2 innings for Andalusia. | Andrew Garner/Star-News

At 11:19 Tuesday night, Andalusia’s 2011 baseball season came to an end, and the Bulldogs walked off the field winners after a 4-3 victory over Class 6A’s fifth-ranked Northview.

The Bulldogs claimed the one-run win over the Cougars after an 8-5 first-game loss to eighth-ranked Charles Henderson.

“We got after it,” Rasberry said. “We came out here with a little focus (against Northview), put the ball in play early and slashed a couple runs across — four of those — and got the lead and was able to hold on there late,” he said. “Ross Graham, a ninth grader, pitched six-and-two-thirds innings and did well for us.”

Rasberry said he was happy for the seniors because they ended with a win.

“I’m proud of the boys to end on a win,” he said. “It’s good for the seniors. I’m proud of all of my guys, especially in that last game. They showed a lot of character, and showed they wanted to go out on a win.”

Andalusia ended its season with a 14-17 record, and beat Straughn, the top-ranked team in Class 4A, which Rasberry said was the “high light” of the season.

“With as much emphasis on that game at that time we though if we we won the series, it would get us in the playffs, but it didn’t work out that way, unfortunately,” Rasberry said. “I think we definitely proved that we have the capability, and potential to play well against them.”

Graham struck out four and allowed three runs on seven hits in 6.2 innings to lead the Bulldogs in the win.

The Bulldogs scored one run each in the first four innings, and held on late.

Andalusia’s Zack Ward scored the first run in the game on an RBI single from Rob Maddox in the first inning.

The Bulldogs scored their second run when Grayson Campbell crossed the plate from third on a wild pitch.

Ward and Tyler Raines came around to score the last two runs, which were unearned.

The Cougars scored one run in the fifth inning, and added two runs in the top of the seventh inning on a double with two outs.

Ward got the save for the Bulldogs pitching 0.1 innings and had one strike out.

Andalusia scored four runs in the first inning, but the Trojans countered with five runs in the second and added two runs in the third inning to put the game out of reach for the Bulldogs.

On the season overall, Rasberry said there were some ups and downs in a good way.

“I saw a lot of life out of these guys and a lot out of these young guys,” he said. “I think we grew a lot, grew a lot as a team in trying to find our identity. I think we started to find out how we are capable of playing baseball.”