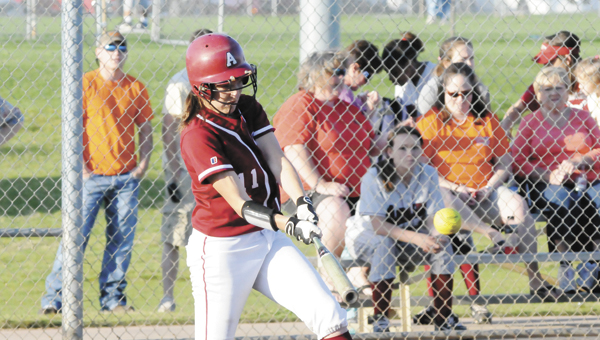 Ashford’s Leslie Morrow hit a go-ahead, two-run single in the top of the seventh inning to help lead the Lady Yellow Jackets to a 4-2 area win over Andalusia Thursday at LBWCC.

The Lady Bulldogs fall to 10-19 overall, and 1-4 in Class 4A, Area 3 after the senior night loss. Andalusia will travel to play in the Elba Tournament today and Saturday. The last area game for the Lady Bulldogs will be next Tues., April 26, against Headland.

“There’re a lot of things to be proud of,” AHS head softball coach Marcus Taylor said. “Losing is never good, and nothing you ever want to do. I was proud of how my girls fought back.

“We had an error here or there that cost us a couple of runs, and it was the difference of the game,” he said. “Overall, I’m proud of my girls. The biggest thing is we hit the ball a ton better than we did Tuesday against a much better pitcher.”

Andalusia had six hits against Morrow.

Allison Moore hit a single, and quickly stole second base with Ashleigh Goss at bat to start the top of the seventh inning with one out.

Goss hit a single, put runners on first and third, and stole second while Morrow was at bat.

Then, Moore and Goss scored on Morrow’s single. Morrow was thrown out at second by Andalusia senior catcher A.C. Riley.

Trailing 2-0 in the bottom of the fifth inning, Andalusia put together two runs to tie the game up.

Sam Greene led off with a single, and later scored on an error.

Andalusia senior Ellie Pollock hit an RBI single to score Emily Terry, who reached on an error to plate the Lady Bulldogs’ last run of the game.

The Lady Bulldogs found themselves in some defensive trouble in the top of the sixth with the bases loaded and two outs.

Pinch hitter Ashton Ingram came in for Ashford’s Tanisha Johnson, and hit the ball to Terry, who then tagged KB Gordon out, advancing to third base for the final out of the inning.

Morrow struck out 15 batters, and allowed two runs on six hits to get the win for Ashford.

Ashford put one run on the board in the second inning on an RBI double from Chasity Myer, and one run in the fourth on an error.

“I’ve got no complaints with Olivia,” Taylor said. “She just keeps fighting over and over again. Even when we get behind on the scoreboard, you can see it on her face that she’s fighting.”