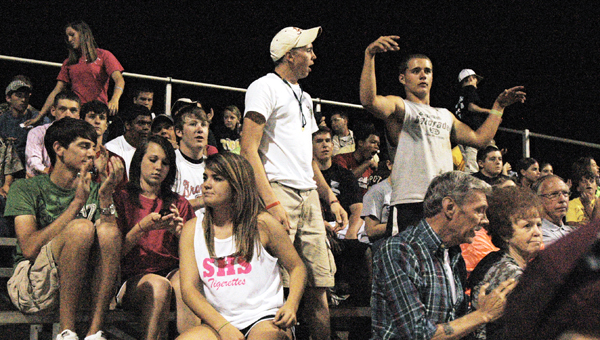 It took more than 10 minutes for Straughn to have a team meeting after its 10-5 first game loss to St. James in the first round of the Class 4A state playoffs Friday night at SHS.

As a result of the first game loss, it took 1 hour, and 45 minutes for the Tigers to beat the Trojans 11-1 in the second game in the best of three series to force a game three, which will decide who advances and who goes home.

SHS head baseball coach John Fussell said he told the players to come out and play with “emotion” during the second game.

“I just told them that they needed to quit feeling sorry for themselves and come out and hit the baseball,” Fussell said. “They came back focused, and Josh (Dewrell) threw real well, and we hit the ball out of the ball park like we’re capable of doing.”

Fussell said his players will have to come out with the same emotion in today’s game they showed during the second game.

“They’re going to have to come back out here (today) with the same mentality and focus,” he said.

Straughn senior Josh Dewrell set the tone of the game with a first-at-bat first-pitch solo home run in the top of the first inning for the Tigers.

Dewrell earned the win on the mound, and Straughn’s defense allowed only one hit for the Trojans. Dewrell allowed one run on one hit and struck out seven. Allen got the save for the Tigers. He struck out four, allowed no hits and walked one.

Straughn’s second home run of the game came in the top of the third to Jones on an 0-1 pitch.

The Trojans scored their only run in the bottom of the third inning on an RBI triple from William Osley.

“They came out swinging the bats, which I knew they could,” St. James head baseball coach Keith Lucky said. “That’s the thing. In the first game, my pitcher (Graham Norwood) did a good job of keeping them off with his off-speed pitches and kept it down in the zone.

“In the first game, we jumped on them like they did to us in the second game,” he said. “We knew it was going to be a battle coming in here. They are a great team, and it’s going to come down to who wants it the most tomorrow.”

Straughn’s Chase Short hit an RBI single to score Lunsford in the fourth inning, and the Tigers added two runs in the fifth on a two-run homer by Jones to put the game out of reach for the Trojans.

In the sixth inning, the Tigers scored three runs to seal the win on a two-run double by Fussell. Fussell’s double scored Short and courtesy runner Doug Mosley. Allen’s RBI single scored Fussell from second base.

Fussell was 3-for-4 with two RBIs; Stinson, Lunsford and Short had one RBI each for Straughn.

St. James’ three home runs in the first game helped lead the Trojans to their first game win over Straughn.

The Trojans launched the first two back-to-back homers in the first inning to take a 4-0 lead over the Tigers.

Osley led off with a single and hit into a double play to put two outs on the board. Taylor Poe reached on a walk, and Joe Goodson hit a single to put runners on first and second base.

On a 1-2 pitch, St. James’ Jack Jabour crushed the ball over the left field fence for the first home run, which scored three runs.

Then, John Slayton found the sweet spot on the bat on another 1-2 pitch, and skewered the ball over the fence at left field.

The Tigers got on board in the second inning when Jones scored on an error.

The Trojans fired back with two runs of their own in the third on a two-run home run by Poe for the team’s third homer of the game.

Straughn scored one run in the fourth inning on a ground out by Stinson.

In the top of the fifth inning, the Trojans scored two runs off RBIs from Goodson and Slayton to score courtesy runner Mason Handey and Frank Moody.

Jones then hit a two-run home run (his first of the day) in the sixth inning to put the score at 8-4.

St. James sealed the win with RBIs from Norwood and Poe in the top of the sixth.

Poe and Jabour had three RBIs each to lead the Trojans. Poe was 3-for-4, Jabour was 2-for-4 and Slayton was 2-for-4 with one home run each.

Jones led Straughn going 2-for-3 with one home run and two RBIs.

Norwood struck out six and allowed five runs on 11 hits in seven innings for the win.

Straughn earned its 30th win of the season Friday night at the Elba Softball Tournament. The Lady Tigers advanced with... read more