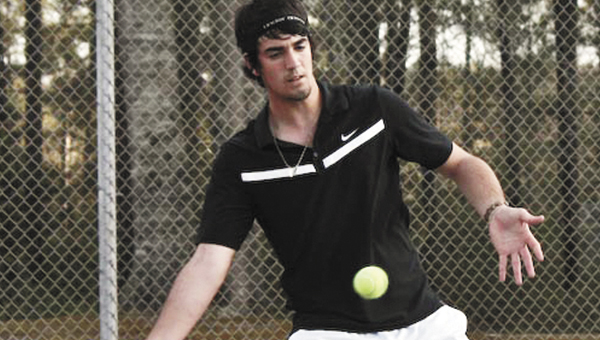 Andalusia’s Chris Smith beat Jemison’s Drew Posey and Haleyville’s Dustin Young in No. 2 singles to advance to the semifinals of the Class 4A state tennis tournament in Mobile. | Catherine C. Wofford/For the Star-News

There’s only one man standing.

Andalusia sophomore Chris Smith won his No. 2 singles tennis matches against Jemison and Haleyville Thursday to advance to the semifinals of the Class 4A state tournament at the Copeland-Cox Tennis Center in Mobile.

“Forehands, forehands and forehands,” Smith said were the keys to the win over Haleyville Thursday.

Smith said after he fell in the first game to Posey that he “regrouped” and started making shots.

“I took it point by point and was patient on the big shots,” he said.

This will be Smith’s third trip to the semifinals at the state tournament. Two years ago, he advanced as the No. 6 seed to the finals, and finished in the semifinals last year.

Smith will begin play today in the semifinals at around 8:30 a.m., where he will play Douglas’ Michael McLauglin.

When asked if he was nervous, Smith said he wasn’t and that he’s looking forward to the finals, where he said he hopes to match up with UMS-Wright.

“Our youth got to us at today,” AHS boys tennis coach Perry Dillard said. “Today was the first time that I could tell it was nerves.

“I mean, we’re really young,” he said. “We’ve got five people that are sophomores and freshmen. I was more happy about being (at the state tournament), then just hoping lets see what happens.”

In No. 1 doubles, Evans and Smith beat Cherokee County’s Granser Surrett and Zach Bishop in the first round, but lost to UMS-Wright in the quarterfinals.

In No. 2 doubles, Patel and Moore lost to Haleyville’s Dustin Young and Christian Caldwell in the quarterfinals.

In No. 3 doubles, Scruggs and May lost to Jemison’s Cole Thompson and Taylor Long in the quarterfinals.

In doubles, Watson and Tillman beat Douglas’ Williams and Jackson in the first round in No. 3 doubles, but lost to St. James in the quarterfinals.

In No. 1 and 2 doubles, Boyington and McCord lost to Guntersville’s Lucy Bradley and Megham Smith; and Beasley and Botta lost to Booker T. Washington’s Starr and Cocking.

Ending on the right note