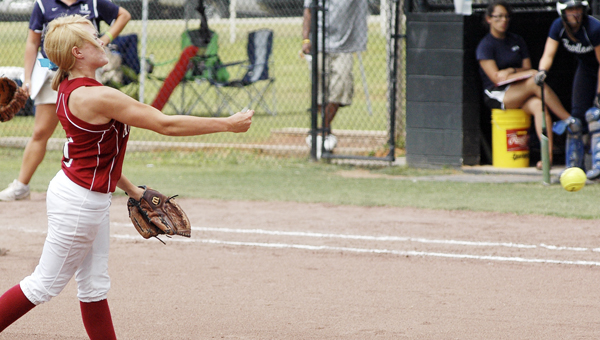 Andalusia ended its season at the Class 4A, Area 3 softball tournament Tuesday at Straughn High School.

Throughout the tournament, the Lady Bulldogs kept each game a competitive one, tallying up three outs at home plate.

“We were able to get three girls out at the plate today,” Taylor said. “It’s frustrating, but I’ve got some hard-fighting girls.”

Ashford’s Leslie Morrow had four RBIs and hit a three-run home run to lead the Lady Yellow Jackets past the Lady Bulldogs.

Lauren Odom and K.B. Gordon added two RBIs each to also lead Ashford in the win.

Ashford got on board in the first inning on an RBI double from Morrow that scored Jessica English.

Additionally, Morrow earned the win on the mound, and had 10 strikeouts. She gave up no runs on two hits.

The Lady Yellow Jackets scored three runs in the third inning on a two-run single by Gordon, and on an RBI double by Odom.

English hit an RBI single to score Brantlee Kirkland and Morrow hit her three-run homer in the fourth inning to give the Lady Yellow Jackets a commanding 8-0 lead over Andalusia.

Ashford sealed the win with an RBI double from Odom that scored Ashleigh Gross.

Andalusia’s three runs in the seventh inning came on an RBI single from Ellie Pollock, and a two-run single by Jessica Park.

Pollock was 1-for-3 with an RBI; Kenna Edmondson and Sam Greene had one run each to lead the Lady Bulldogs.

English was 3-for-4 with one RBI; Gross was 2-for-4 with two singles; and Charity Myers was 1-for-2 with a double for Ashford.

Andalusia took an early 1-0 lead in the first inning on an RBI single from A.C. Riley to score Emily Terry, who reached on a single.

The Lady Rams scored two runs in the bottom of the first inning on two unearned runs.

Headland’s Jordan Watson was 3-for-5; Caroline Singleton had three singles; and Britt Elliot and Jaycie Walker had two singles each.

Andalusia ended its season with an 11-24 record.

On the season overall, Taylor said at times it got a little “frustrating,” but added that it was a joy to watch the girls compete in every game.

“That is the season,” he said. “At times, it was very frustrating. I enjoy these girls so much and enjoy watching give their all.”

The Florala Lady Wildcats finished runner-up in the Class 1A, Area 2 tournament Tuesday, and will play in their first... read more