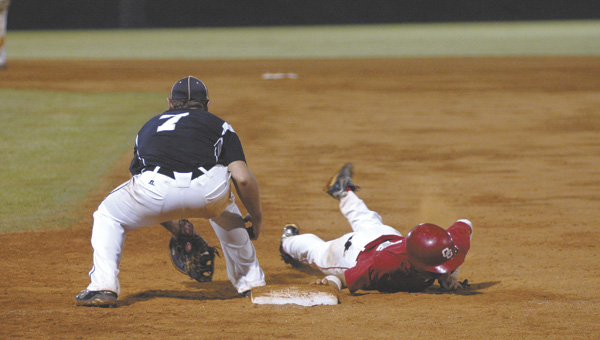 Straughn’s Nick Allen (7) tries for a tag at first on a pick off.

BESSEMER — With the game tied 1-1, Oak Grove scored four runs in the top of the seventh inning and walked away with a 5-1, second-game win over top-ranked Straughn Friday night, after falling 5-4 in the first game.

With OGHS’s second-game win over Straughn, both teams will play in a win-or-go-home game three today at 2 p.m. to finish the third round of the Class 4A state playoffs.

“It isn’t like we haven’t played a game three before,” Straughn head baseball coach John Fussell said. “I thought we pitched well in the first game, and hit the ball well. Give them credit, their two pitchers played well, but we still didn’t hit.

“We didn’t make the plays when we had to,” he said.

Straughn’s Zack Stinson throws a pitch during game one Friday. Straughn won the first game 5-4, but fell 5-1 in the second game.

Playing a game three in a playoffs series is nothing new to Straughn (30-9). After a 10-5 first-game loss to St. James in the first round, Straughn came back to win the next two games to advance in the playoffs.

Since that first-round victory, Straughn swept Headland in two games.

Oak Grove (22-11) has not played a game three in the playoffs this season, getting sweeps in the first two rounds.

Oak Grove’s Keith Elliott, who finished 0-for-3 with two RBIs, came through for his team, knocking the ball to deep left, where an error occurred, and two runs were scored.

“We lost a heart breaker in the first game, and it would’ve been real easy to lay up, but they came and fought,” Oak Grove head baseball coach Kyle Hammonds said. “My hat’s off to Straughn. They’ve got a great team. It’s all we’ve got to play with them. Our kids never gave up.”

Then, Cody Cain, who finished 2-for-4, hit two runs in that would end up winning the game for Oak Grove.

The game was tied 1-1 until the top of the seventh inning.

Oak Grove’s J.T. Bartley struck out nine in the win.

Straughn got on board first on a solo home run by Josh Dewrell.

Oak Grove’s tying run came in the top of the second inning on an error, which plagued Straughn.

Dewrell, Nick Allen and Zack Lunsford got one hit each for Straughn.

With two outs and the bases loaded, Straughn’s Chas Short hit a three-run triple to help lead his team to the first-game win.

Oak Grove came back, and added three runs in the bottom of the sixth inning, but Straughn’s pitching held the game in check.

Straughn’s Zack Stinson pitched six innings, and struck out eight in the win. Dewrell got the save with a strikeout.

Straughn scored two runs in the second inning on an RBI single by Lunsford, and a passed ball.

Lunsford was 1-for-3; Cody Hughes and Allen were 1-for-4 each for Straughn.

Chris Beavers, Cain and Matthew Bowden were 2-for-4 each for Oak Grove.

Straughn’s Cody Hughes tries for a tag out at first base during the second round series against Headland on Monday.... read more