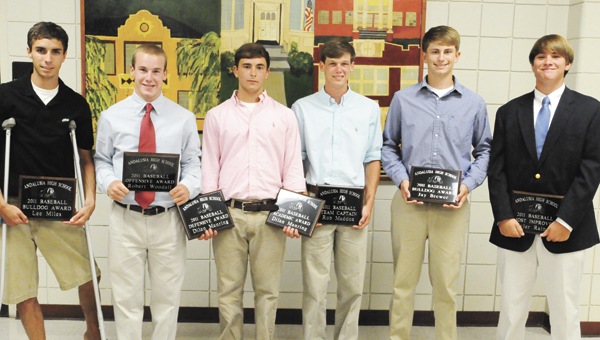 Players from the softball, baseball, tennis and golf teams were recognized, and special awards were given to select athletes who excelled in their respective sport.

Before each sport gave its awards, all head coaches thanked the school administration, the board of education, the parents, AHS Booster Club and the volunteers who helped throughout the season.

The varsity and junior varsity teams were recognized, and each received their letter award.

Additionally, Locklier and Morgan were recognized for their efforts as managers on the team.

Andalusia’s baseball team ended its season with a 4-3 victory over Class 6A’s Northview, and a 14-17 season record this year.

Special awards were given to: Tyler Raines, most improved player award; Jay Brewer and Lee Miles, Bulldog award; Robert Woodall, offensive award; Dilan Manring, defensive and academic awards; Rob Maddox, team captain; and all seniors received a plaque and their home jerseys for their time on the team.

Chris Smith, who was named the most valuable player, finished in the finals of the Class 4A state tennis tournament.

Players on the boys tennis team received their letter awards, and special awards were given to: David May, most improved and rookie of the year; Brandon Scruggs, Bulldog award; Alex Evans, academic award; and Mayur Patel and Evans, team captains.

Josh Atkinson finished his state tournament run Tuesday with a 79 at Magnolia Grove in Mobile.

Atkinson also was given the captain and top medalist awards at the banquet Tuesday night.

John Starr, who won the academic award, and Stinson Thompson were named captains; the most improved player award went to Jordan Theus; and the newcomer award went to Kathryn Williams.