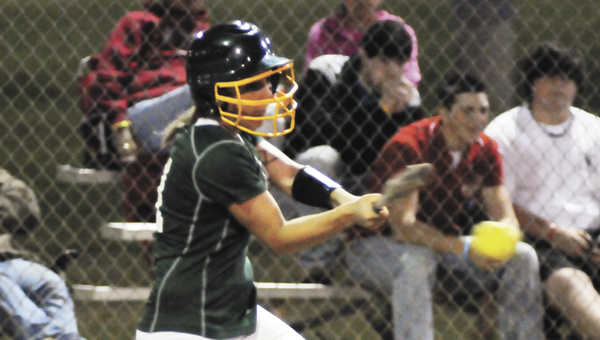 Florala’s Paige Irwin gets a hit. The Lady Wildcats will play in their first regional tournament. | File photo

Florala will hit the road today for an historical journey.

The Lady Wildcats will make their first trip to the Class 1A South Regional tournament in Gulf Shores this weekend, and head softball coach Jonathan Stinson said the team is “beside themselves.”

“The girls are real excited,” Stinson said. “I think we’re going to surprise some people.”

Florala lost to Kinston in the finals of the Class 1A, Area 2 tournament last week, and beat Geneva County to seal a berth in the regional tournament.

Ever since then, Stinson said the team has been working on some new things to help the girls remain “focused.”

“We’ve been working on making the routine plays, and basically knowing what to do in every situation,” Stinson said. “Most of the time, when we have errors it’s because of a lack of focus, and not knowing what to do with the ball.

“We’ve got it down to where it’s where they really don’t have to think — it’s more of a reaction,” he said. “I’m hoping that helps.”

The Lady Wildcats will play former area foe Pleasant Home Friday morning at 8 on Field No. 2 at the Gulf Shores Sportsplex to start the double elimination tournament. Their second game is slated for 11 a.m.

Stinson said despite falling to Pleasant Home three times during the regular season, his girls are ready for the additional opportunity to play the Lady Eagles.

“They’re looking forward to playing Pleasant Home again,” he said. “They don’t feel like they’ve played their best against them at all.

“We’re going to take it one game at a time,” he said. “We’re trying to prepare ourselves when the situation arises to handle it.”