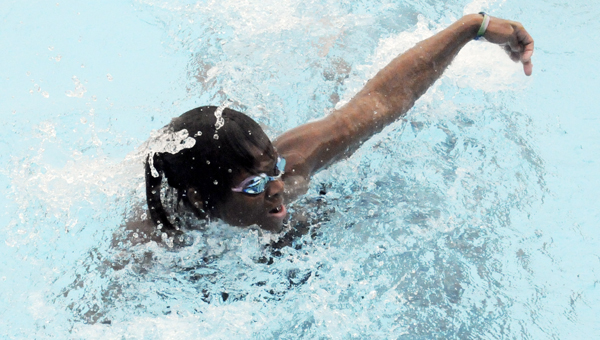 It’s been a weird month for swimming tempo, but 11-and-up Stingrays coach Gavin Donaldson said it will be interesting to see what kind of times the swimmers will post in today’s intersquad meet at Cooper Pool.

“This has been kind of a strange May as far as temperatures go,” Donaldson said on Thursday. “We haven’t been able to work on endurance until this last week. The first part of May, the water was semi-warm and then you had a week of cold and then a week of hot. The pool is starting to stabilize where the kids can really start building their endurance now.”

Peek’s replacements — 9-and-10-year-old coach Candy Parker and 8-and-under coach Carrie Browning — will get their first tastes at coaching on the swim team today when the meet begins at 9 a.m. at the pool.

“It’ll be interesting to see how the swimmers perform on their first meet,” Parker said. “I’m looking forward to see how well they compete.”

At the end of last year’s swim season, the Stingrays went into fall and winter workouts, where they worked on the fundamentals, Donaldson said.

“The off season over at Mizell had 10-12 participate regularly,” he said. “That’s where these kids received a lot of stroke and turn (instruction). In the winter session, we started to build on stroke and turn and started to do some endurance.

“It was beneficial,” he said. “It was also good to see how they did in the first session, and what was needed to go back over with them.”

After the intersquad meet today, the Stingrays will travel to Troy on Sat., June 11 for their first meet competition.

The Stingrays have a total of three meets before swimming at district to qualify for the state tournament.

“The goal is the same each year,” Donaldson said. “The goals for the swimmers are to meet or exceed state qualifying times —that guarantees you a slot at state.”

Parker said another thing she is looking forward to this season is the overall “community” on the team.

“One of the best things about the swim team is the community among the athletes and the parents,” she said. “It’s very encouraging and fun and at the same time, it is very challenging.”

All in all, Donaldson said the swimmers have worked hard to prepare for the meet today.

“It’s been a weird May,” he said. “The kids are not where I want them to be right now beause of the water not allowing us to get to that point. They’ll have more at our next meet in two weeks in Troy.”

Family time for coaches is a rare commodity, but local coach Jimmy Reeves hopes to help give coaches and their... read more