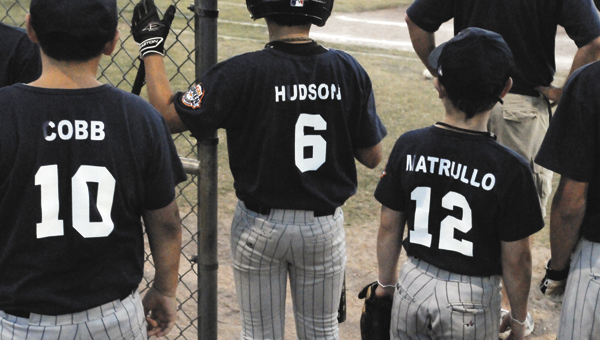 Yankees players wait in the dugout during action Monday night at the Andalusia Sports Complex. The Yankees won the 12-and-under end-of-the-year tournament Tuesday night over the Devil Rays. | Andrew Garner/Star-News

Trailing 5-1 in the second inning, the Yankees (County) got its offense going Tuesday night, and beat the Devil Rays 10-5 to win the 12-and-under end-of-the-year single elimination tournament at the Andalusia Sports Complex.

The Yankees scored four runs each in the fourth and fifth innings to seal the victory.

Earlier in the contest, the Devil Rays shot out to a 5-0 lead before the Yankees added one run in the second inning.

In the fourth inning, A. George led off with a triple, and scored on a ground out by C. Dorman.

T. Cobb reached on a fielder’s choice and later scored on an RBI double from C. Matrullo.

H. Peeples walked and later scored on an error for the fourth run in the inning.

C. Hudson, H. Cawley, George and D. Ainsworth scored in the fifth inning on one hit and no errors.

For the Devil Rays, Christopher Holley and Simeon Bowden scored in the first inning on a two-run single by Cody Robbins.

The Devil Rays added three runs in the second inning on an RBI by Bowden, and a two-run single by Robbins.

Robbins was 2-for-3 for the Devil Rays.