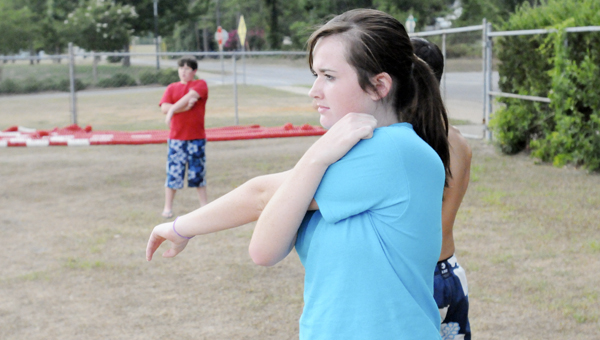 For the past two weeks, the Andalusia Stingrays swim team has been catching up on one thing — endurance.

“Due to the weather, we were two weeks behind,” 11-and-up coach Gavin Donaldson said. “We’ve had two weeks of endurance practice, which I hope helps pose faster times.”

The Stingrays will travel to participate in their first competitive meet in Troy on Saturday, where they will face the host Tiger Sharks and Eufaula’s Waverunners.

In their intersquad meet on May 28, the Andalusia swim squad posted better state qualifying times than last year, a feat Donaldson said with the endurance training, he hopes the swimmers will be able to beat.

The endurance training has been mostly made up of dry land core workouts and working in the pool for two hours at each practice, Donaldson said.

“Most of what we do to build endurance is a sprint right now,” he said. “The kids know what it takes to get to the next level and to work toward putting this team back on top.”

“Some of our teams bettered their time from state last year,” Parker said about the intersquad meet results. “When they have competition, they’ll push even harder and better.”

In her individual group of swimmers, Parker said the boys and girls have increased their swim length in the pool.

“My group of swimmers have gone from swimming one lenght of the pool to swimming, turning around and coming back,” she said. “They’ve gotten so much quicker, and they’ve gotten a whole lot better. They seem to have grasped that very quickly.”

But the bottom line for all the swimmers is to post faster times, Donaldson said.

“Still, I believe after two solid weeks of endurance they’ll hop back out and be ready for their next event,” he said. “I really expect to see some fast times Saturday out of more swimmers.”