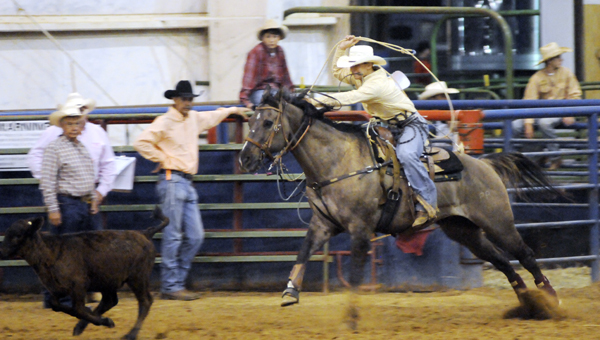 There were three girls and three boys taking the top three spots all around after the first day of competition at the 2011 Alabama High School Rodeo Association’s state finals at the Covington Center Arena.

The leader for the girls was Raven Simpson, who had 541 points after Thursday’s goes. Chrissy Morris was in second with 308 points, and Amber Williams was in third place with 250.

The leader for the boys was Nelson Wyatt, who has 414.5 points. Zachary Wilson was in second place with 384.5 points, and Trey Moore was in third place with 307 points.

Red Level’s Clay Elmore sat in 17th place with 73 points, Caleb Varner was in 21st place with 56 points and Opp’s Tyler Elmore was in 25th place with 17 points.

The following are the top finishers from each category, along with any local competitors’ points from the first day of competition:

Complete results from Friday and today’s competition at the rodeo will be in the Tues., June 21 edition of the Star-News.