Cheerleaders work out, too 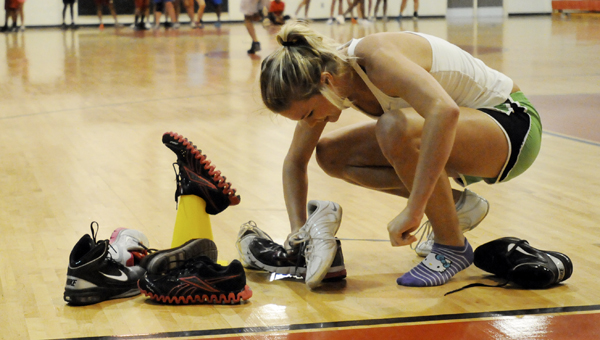 Since the boys work out during the summer for football and other sports, Andalusia assistant coach Teresa Herring thought that she’d try it out for the girls.

The week after school got out, girls from all sports at AHS have met three days per week to work on getting stronger, faster and better, Herring said.

“I felt like it’s something that’s necessary,” she said. “The boys lift weights. Every program I’ve been in, we’ve had summer work outs.

“I think it’s something that can make them better,” she said. “We have some great teams and great athletes, but they can be better and they can be greater.”

Herring said she decided to hold the summer work outs for the first time at the school about a month before school was over.

“I could see how much better they could be with a little strength training,” Herring said. “Their head coaches do multiple duties, and sometimes don’t have the time to focus on the conditioning side of things.

Herring said the summer program benefits girls in all sports at the school.

Thursday’s work out signified the last one until July 5, where they’ll pick up right where they left off, Herring said.

Herring said a common aim for the work outs has been to build “a sense of teamwork among all sports.”

At three days and seven-and-a-half hours per week since June 6, the Opp Bobcats football team has been busy, working... read more