Bulldogs finish 7-on-7 in semis 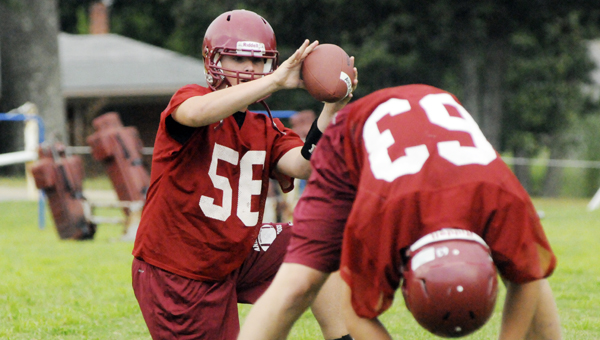 Andalusia’s football team got its first taste of football competition Thursday in the Wiregrass 7-on-7 tournament at Northcutt Field in Dothan.

The Bulldogs finished in the semifinals, losing to Dothan in the pool championship series.

Andalusia was in the same pool as Dothan, Greenville and Northview. The other pool consisted of Northview’s No. 1s, Dothan’s No. 2s, Headland and Daleville.

Dothan earned the No. 1 seed in Andalusia’s pool, and Daleville earned the top seed in the other pool.

“It is what it is,” AHS head football coach Brian Seymore said about Thursday’s tournament result. “We worked on our coverages on defense, and got a lot of kids in there.

“We also had the chance to play three quarterbacks, and some receivers got some reps,” he said. “It was the first time we’ve done (a 7-on-7 this summer) and we’ve got to be more consistent. We enjoyed it. It was a good way to get away to travel to Dothan to mix it up a bit.”

Andalusia will play in three 7-on-7 tournaments this summer. It next two tournaments will take place at the end of July. The Bulldogs’ second tournament will be in Samson, and their third will be in Straughn for Tigers’ annual exhibition.

Cheerleaders work out, too