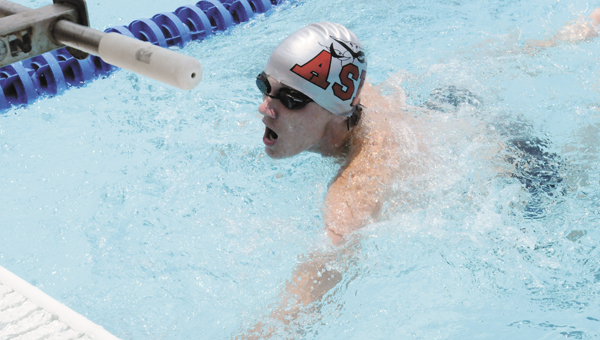 When the Stingrays hit the water this morning in Eufaula for their second competitive meet, the only thing they can do is get better, coaches said Friday.

“For some reason, the Eufaula pool, for us, bodes fast times,” 11-and-up coach Gavin Donaldson said. “Hopefully, I’ll have some more individuals breaking state qualifying times, which is always a good thing.

“Once they do it, they’ll maintain that time for district because that guarantees them a slot at state,” he said.

10-and-under coach Candy Parker said the only thing her kids can do at this point is “improve.”

“They have done extremely well,” Parker said. “We’re still working on the relay teams to make it just right. Individually, we’ve set a lot of times that are a lot faster than state times last year.”

Last season, the district tournament was held in Eufaula, and the Stingrays finished in second place.

Given that, 8-and-under coach Andy Shaddix said he’s looking for some of the less experienced swimmers that haven’t swum that much this summer to step up and do well.

“If you look back at last year, we were there (Eufaula) twice,” Shaddix said. “The last time was for district and the times the team put up they basically shattered their previous times.

“I’m looking forward to seing what kind of times we put up (today),” he said.

Shaddix said that a few of his swimmers are gone on vacation this week, which will allow some swimmers to swim for their first time.

The swim meet is set to start at approximately 10 a.m. today at the Eufaula Community Center with warm ups at 9 a.m.

The Stingrays are coming off of their meet in Troy that took place two weeks ago, where faster times were posted.

Donaldson said the last two weeks have been dedicated to the same thing — “catch up.”

“We’ve had two more weeks of practice, and we’re predominantly working on the same things we were working on before to play catch up,” he said. “We’re three weeks away until district, and we’ve got to get down to the nuts and bolts to get ready.”

Donaldson said he’ll use today’s meet to see what needs correcting and improving with his group.

“It’s another one of those meets where it prepares them for what we’ll have at district with an 8 a.m. warm up there,” he said. “The team needs to get plenty of rest (Friday night). That’s the biggest thing right there.”

Parker said the main key for her team is to execute well on “starts and turns.”

“That’s what we work on the most,” she said. “The quicker they get those, the better off they are.

“We are definitely very competitive against Troy and Eufaula,” she said.