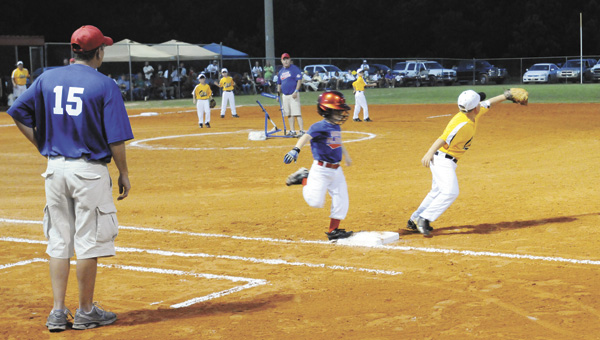 Opp and South Alabama’s 8-and-under All-Stars baseball teams dueled through four innings Saturday night, and the Bobcats walked away with a 4-0 win over the Andalusia team at the district tournament in Opp.

Opp advanced in the winner’s bracket with a 30-0 win over Evergreen in the night cap Sunday night.

Chandler Byron led Opp with a single in the fifth inning and later scored on a double from Lane Ballard to go up 1-0.

Ballard came in on a single from Payton Ellis to make it 2-0.

Jesse Coon reached on a double and later scored on an RBI single from Wyatt Horn.

Brian Scofield hit a single to score Coon, who was the winning run for the Bobcats.

Thomas Glissen was 2-for-2 for the Bobcats.

Garrett Simpler and Kameron Whitaker were 2-for-2 each for South Alabama.

South Alabama scored 17 runs in the first inning to help Andalusia walk away with the 31-run win over East Brewton.

Long, Glenn and Kilpatrick were 3-for-3 each.

East Brewton scored its only run in the third inning on an error.

Opp earned a forfeit win Sunday night, as the Bobcats scored all of their 30 runs in the first inning.

Complete coverage of Monday night’s championship games will be in the Wed., June 29 edition of the Star-News.

Good for the soul summer