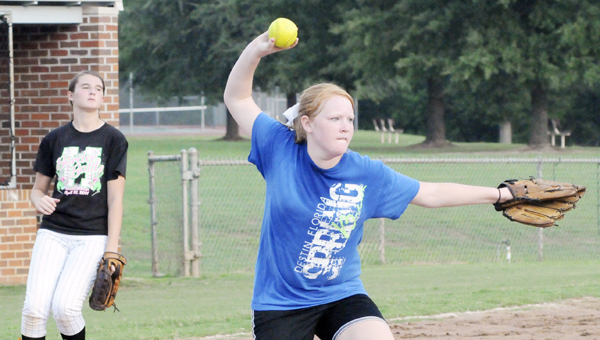 South Alabama met Piedmont in its first game of the tournament, where it won 14-1. Andalusia went on to cruise through the winner’s bracket, defeating Russellville 10-1 and Boaz 8-2 before facing Piedmont again in the title game.

This is the same team that will represent South Alabama in the 2011 12U Babe Ruth Softball World Series next month at the sports complex.

South Alabama scored seven runs in the first inning on eight hits, and its defense allowed two hits for Piedmont in the five-inning win.

Walker added the last run in the fifth inning on an RBI single from Hope Ladson.

Ladson and Stewart combined for five RBIs to help lead South Alabama to the 13-run win over Piedmont in the first round.

South Alabama broke out in the first inning, scoring 11 runs and added three runs in the second inning in the win.

Piedmont scored its one run in the third inning on an RBI single from Kalista Free.

South Alabama scored four runs each in the first and second inning and added two runs in the third inning to get the victory.

Walker and Willis scored one run each in the three innings.

Stewart scored two runs; and Hamrac and Ladson scored one run each for South Alabama.

Russellville scored its run in the third inning.

Hamrac had three RBIs, and Tiffany Dean and Stewart added one RBI each for South Alabama to help the Andalusia team send Boaz down to the loser’s bracket.

South Alabama scored two runs in the first inning on a sacrifice ground and a hit-by-pitch.

Thirty Andalusia swimmers in both individual and relay categories qualified for the state meet July 29-30 in Cullman this past... read more