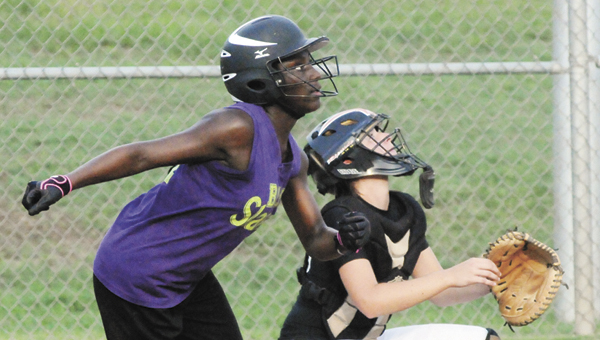 South Alabama 12-and-under player Aaliyah Lawrence runs from home plate during an earlier practice. The 12 teams playing in the World Series have been set for the tournament next week. | Andrew Garner/Star-News

The 12 World Series teams are set.

Now, it’s time for some softball.

In a little more than a week, the 2011 Babe Ruth Softball 12U World Series will take place at the Andalusia Sports Complex from Aug. 4-9, and 12 teams from around the country will vie for the coveted title of champion.

The final team that qualified for the World Series did so Monday morning, tournament coordinator Dwight Mikel said Tuesday.

Mikel said everything is “coming along real well” in getting ready for next week’s tournament.

During a regular World Series committee meeting Tuesday, Mikel said the finances for the tournament “are in good shape.”

However, Mikel said right now the key to the financial success of the tournament will come from three sources.

“The success of it is how many folks come, the concession revenues and the vendor fees generated, which are percentage driven,” Mikel said. “Other than that, if those three things come in, then we’ll do very well.”

Mikel said the revenues from the folks that attend the tournament, the concession and the vendors are roughly anticipated to be about $32,000-$33,000.

Teams will arrive in Andalusia next Wed., Aug. 3, some time after lunch, Mikel said.

7-on-7 at Straughn is Thursday

Teams from Andalusia, Straughn, Flomaton and Pleasant Home will compete in this year’s 7-on-7 tournament at SHS. | File photo... read more