To the next level 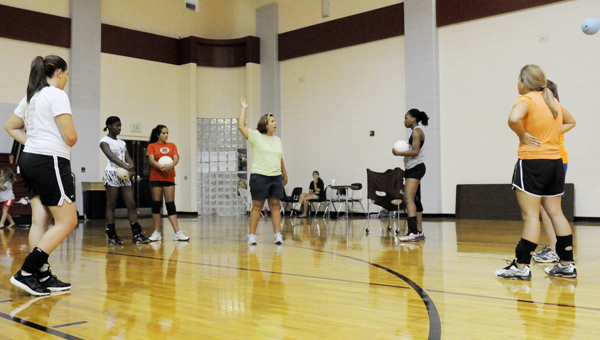 It’s the first day of volleyball practice for the Andalusia Lady Bulldogs, and head coach Angie Grimes is already making notes on how to take her team to the “next level.”

“Everybody’s starting to come together, and they know what they have to do in here when they come to practice,” Grimes said Thursday.

In 2010, the Lady Bulldogs made another appearance in the Class 4A Elite 8 state tournament in Pelham.

Andalusia fell in the quarterfinals to Jacksonville 3-0, and ever since then, Grimes has been waiting on this season to start.

“On the way home, I started thinking about what we can do better (in 2011),” she said last October at the state tournament. “We’ve got to pick up our speed more.”

All but one player on the court will hold the same position as last year, Grimes said.

Andalusia will be in Class 4A, Area 3 with Straughn, Headland and Ashford. This season, the Lady Bulldogs’ area matches will be tri-matches to cut down on travel costs.

The first area tri-match for Andalusia will be Sept. 8, at Straughn.

Grimes said the team’s goal has always been to make it back to Pelham (state tournament).

“Our goal, always is to use everyone to get better to get to the next level,” she said.

“Playing as a team is really one thing I want to work with them on,” Grimes said. “Fundamentally, everything is sound.”

Andalusia’s first match will be Thurs., Aug. 18, at Elba.