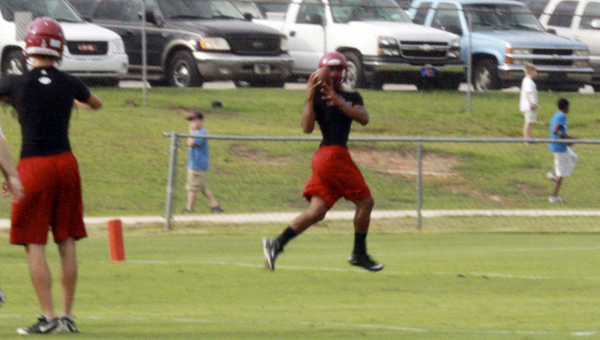 The Bulldogs beat Flomaton 22-14 in the championship game. | Andrew Garner/Star-News

Andalusia’s varsity and B-team football only lost one game during Thursday’s 7-on-7 football tournament at Straughn High School, and beat Flomaton 22-14 in the championship game to win the tournament.

The only loss for Andalusia came to Flomaton’s B-team to the Bulldogs’ B-team, where they lost 22-9.

Andalusia head coach Brian Seymore said he was “pleased” with how his players played Thursday, especially on defense.

“Our defense has been playing well all year long on 7-on-7s,” Seymore said. “Our defense executed our defensive game plan.”

But the biggest thing that stood out for Andalusia was that younger players’ play on the field, Seymore said.

“We beat Straughn’s first team, and then we beat Pleasant Home,” he said. “We actually played well against Flomaton.”

Drills during 7-on-7 tournaments utilize a passing attack for football teams.

“It’s just not what we do,” SHS head football coach Trent Taylor said about the passing attack. “I thought we got better as the game went along.

“From a defensive stand point, I thought we probably looked as good in coverage this year as we did last year,” he said. “The biggest thing we did was compete.”

Taylor said the team had been working on the passing attack for its offense and defense for about a week leading up to the tournament.

“I was proud of the way they played,” he said. “Anytime you can put a kid in competition, you learn something about them.”

“They played hard and competed,” he said. “That’s what we were trying to get out of it, just getting them to compete.”

To the next level