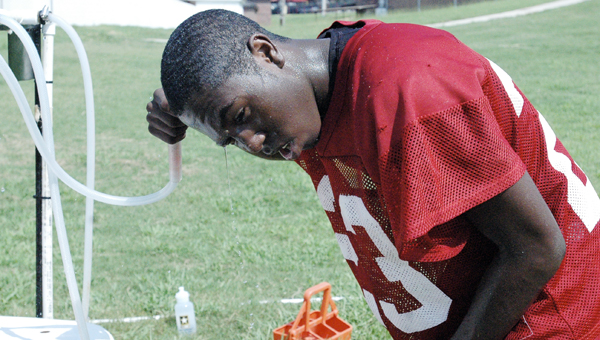 It’s every football fan’s favorite time of the year — the start of fall practice.

However, with the start of fall practice comes one battle players face each day — the stifling heat.

According to the Weather Channel’s website, the heat index for today will be 107 degrees Fahrenheit with a high of 99 degrees. Friday’s forecast calls for the heat index to be around 102 degrees.

The Bulldogs hold team practices at 3 p.m. each day and take frequent breaks. Usually, the team tries and gets in two hours and 15 minutes of work in each day, Seymore said.

Additionally, Seymore said the players are aware of the dangers of heat illness, and take precautions of their own like eating a good meal the night before practices and staying hydrated.

Florala coach Justin Jones said he holds practice later in the day just to stay away from the heat, noting that practice didn’t start until 5:30 p.m. Tuesday.

“We’re making sure the kids are getting plenty of breaks,” Jones said. “We’ll work 20-25 and take a break.

“When we have two practices, our practices aren’t as long,” he said. “We’ll break it up and go another hour, and hour and a half.”

Cooling stations at practices are a common sight with multiple coolers with ice and water, along with water bottles at each player station.

Pleasant Home coach Ronnie Douglas said his players take a short water break followed by some time in the shade before getting back to work.

“Then, we go back out closer to (5 p.m.) when those temperatures drop a little bit,” he said.

Douglas said during the team’s break in the locker room, fruit and Gatorade are made available to the players.

The Opp Bobcats start their practices in the early evening, and head football coach Jack Whigham stresses to his players the importance of staying hydrated off the practice field.

“I think one of the big keys is hydrating themselves during the day,” Whigham said. “If they do that adequately before practice, then they manage pretty well.”