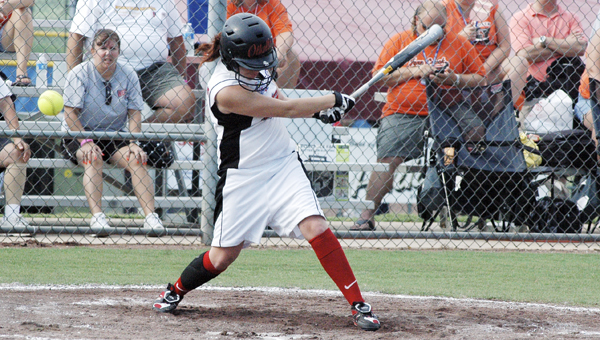 Massachusetts’ Halifax rolled to a 20-0 win over Brewton to drop Brewton to 0-3 in tournament play.

Oviedo, Fla. defeated Hazlet of New Jersey 4-2 while California’s Lodi dropped East Brewton to 0-3 in tournament play with a 10-0 win.

In the 7:30 p.m. games, Louisiana’s Franklin defeated Fern Creek of Kentucky 4-0, and in the final game of the night, Alex City lost to Washington’s Othello, 5-1.

Brewton’s hitting woes continued Friday afternoon as they were held to no hits and remained scoreless in tournament play with a 20-0 loss. Brewton has been outscored 14-0, 15-0 and 20-0 in their three tournament games.

In the loss Friday afternoon, Brewton was held to no runs, no hits, and made two errors while Halifax scored 20 runs on 13 hits and made no errors.

Halifax led 1-0 after the first inning then scored 19 runs in the bottom of the second inning.

For Halifax, Maddy Barone had three RBIs and Shannon Grindle and Libby Czarinak had a double each.

Barone pitched in the win for Halifax.

In the first of the 7:30 p.m. games, Franklin earned a shutout win over Fern Creek of Kentucky 4-0.

Franklin scored two runs in the second inning, one in the fourth and one in the sixth and had five hits in the win.

Sarah Sonnier pitched in the win for Franklin while Madison Williams took the loss for Fern Creek.

At the plate for Franklin, Kennon Stelly, Sonnier, Ashlee Meyerholtz and Sadie Payne had hits. Sonnier had two singles and one RBI while Meyerholtz had two RBIs and Payne had one.

For Fern Creek, Kristen Smith and Cassie Peavler had the two hits in the loss.

Othello had five hits and three errors in the loss while Alex City had three hits and two errors.

Alex City’s lone run came in the second inning while Othello scored one in the first and two each in the fourth and fifth innings.

For Alex City, Shay Johnson, Aaliyah Brooks and Katie Royster all had hits. Taylor Phillips pitched in the loss.

For Othello, Diamond Franco led with two hits. Franco started the game in the pitching circle while Kristen Quigley closed out the win.

Sarah Sonnier only had a few words to describe how she felt upon hearing the news that she broke the... read more