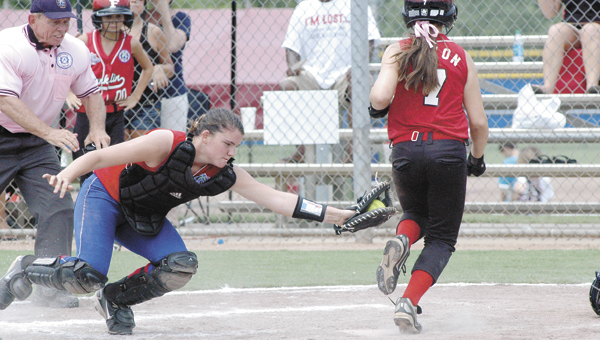 South Alabama’s Hope Ladson tries for the tag on Friday morning against Franklin, La. The host team is now 2-1 in pool play after winning two games on the second day of the World Series. | Andrew Garner/Star-News

South Alabama picked up its first win of the tournament Friday morning with a 9-6 win over Franklin, La.

South Alabama picked up their second win Friday night to go 2-0 as they defeated Mineral Area 5-1.

“We have been struggling the last two games at hitting the ball, bunting the ball and putting the ball in play and we finally did that tonight,” Tucker said. “We finally put it all together and hit the ball a little bit. Our defense looked great and our pitching looked better than it did last night. We just finally put all the facets of the game together. We made a complete game.”

Tucker said the team had to switch to play more “small ball” late in the game.

“In the fifth inning we had to go to a little small ball to get some things fired up,” she said. “We got some big hits and Katlynn Schively pitched a great game and came up with a big hit there and scored two runs for us. So we put the ball in play with small ball and came up with the big hits when we needed it.”

After a scoreless first three innings, Missouri struck first with one run in the bottom of the fourth.

Schively earned the win, going six innings, and allowing one earned run, one hit, walked two and struck out 12.

At the plate, Santana Hamrac had two hits and one RBI while Schively had a double and two RBIs.

South Alabama’s Colby Adams allowed no runs on one hit and struck out three in three innings to help lead the host team to its first victory of the tournament on Friday.

Hayden Willis and Adams scored two runs each, and Schively, Sarah Langford, Taylor McGhee, Santana Hamrac and Brentley Armstrong added one run each in the win.

The host team scored four runs in the first inning, added two runs each in the third and fourth innings, and one run in the sixth.

Willis was 2-for-3 for South Alabama.

Franklin’s Ashlee Meyerholtz was 1-for-3 with two RBIs.

Oviedo, Fla., dominated its first game Friday against East Brewton, but battled it out against Hazlet, N.J., in the night... read more