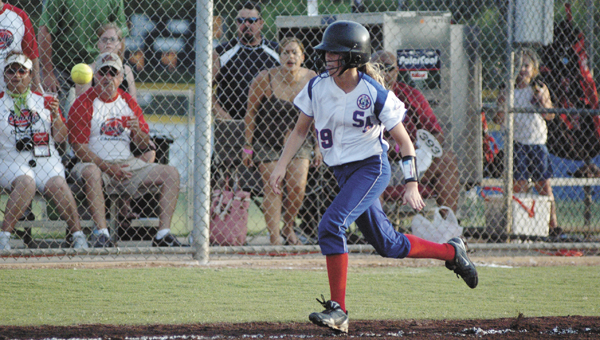 South Alabama got its ticket to the bracket portion of the 2011 Babe Ruth 12U Softball World Series by defeating Franklin, La. earlier in the tournament. | Andrew Garner/Star-News

ANDALUSIA — Just when South Alabama’s 12U Babe Ruth Softball team thought they were out of the World Series, a turn of events happen.

South Alabama lost to Othello, Wash. 3-0 tonight in its last game of pool play to finish with a 3-2 record.

After the host city’s game was over, the winners from the National Division pool were announced. The top three from each division advance to the bracket double elimination portion of the World Series, which begins today at 8:30 a.m.

Approximately 30 minutes later, Babe Ruth officials put their heads together, and reversed the original decision to give Franklin its No. 3 finish in the National Division based on South Alabama’s earlier win over Franklin on Friday.

South Alabama coach Candace Tucker said it was a whirlwind of an evening.

“I can’t even explain the emotions going on right now,” Tucker said. “I was angry at myself to start with, and then I was upset. I was upset because the girls were upset, and then I was nervous waiting on them to hear what they decide.

South Alabama will play Hazlet, N.J. tomorrow at 8:30 a.m. to begin the double elimination portion of the World Series.

“We finally started hitting the ball really in that last game (against Othello) better than any of the other games,” Tucker said about the day’s games. “We just couldn’t get anything to fall. We fell behind early with the errors (in the Othello game).

“I feel like if we come out and hit the ball and play the defense we’ve been playing, then we’ve got really good chance to actually win some games tomorrow,” she said.