Let’s do the Wop 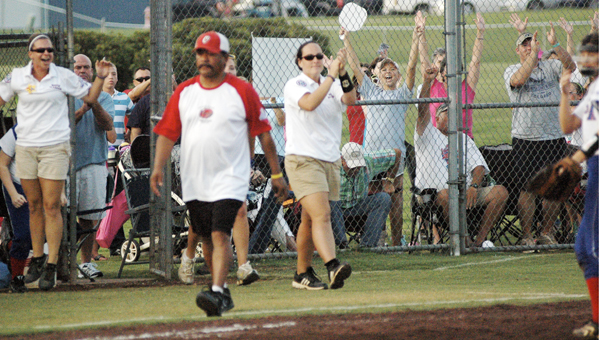 South Alabama's coaches, players, parents and fans celebrate after its 2-0 victory over Othello, Wash. tonight. The moms of the players did the WOP on a deal after the game. | Andrew Garner/Star-News

ANDALUSIA — The deal was made, and South Alabama’s moms came through in the end.

The host city 12-and-under softball team beat Othello, Wash. 2-0 tonight to advance to the 2011 Babe Ruth Softball World Series semifinals of the winner’s bracket, where it will face Oviedo, Fla. at 5:30 tomorrow night.

On Saturday night, South Alabama suffered a 3-0 loss to Othello to end pool play, and after it got back in the tournament after a short mix up, the players’ moms made a deal that if they beat the team from Washington state again, then they’d do the WOP, a dance the team does after each victory.

“The girls put so much heart and effort into this,” Ashley Dean, father of Tiffani Dean said. “If they beat Othello, then the moms were going to do (the WOP) on a deal.”

South Alabama coach Candace Tucker said “defense” has been a big key for the team.

“I really think that’s the key to a lot of our games,” Tucker said. “If we can get our pitching on and defense on, we can put the ball in play and bunt it enough to score some runs when we need to.

“If we can hold a team to no runs like this, we’re in good shape to help ourselves out,” she said. “It really comes down to defense and pitching.”

Abby Walker struck out three batters and allowed no runs on three hits in four innings for the host team. Katlynn Schively came in in relief, and struck out one in two innings while allowing one hit and one walk.

Molly Stewart and Hope Ladson had one RBI each for South Alabama.

Tucker said there will be a lot of distractions for the girls with the start of school tomorrow.

“I hope they come at 4 o’clock ready to play softball,” she said. “I know that a team from Florida is going to be good. We’re looking forward to playing them.”

In other action tonight, Oviedo beat Lodi, Calif. 5-1 to get into the semifinals of the winner’s bracket.

Complete coverage of today’s games will be in the Tues., Aug. 9 edition of the Star-News.

ANDALUSIA — South Alabama and Lodi, Calif. picked up wins this morning at the 2011 Babe Ruth 12U Softball World... read more