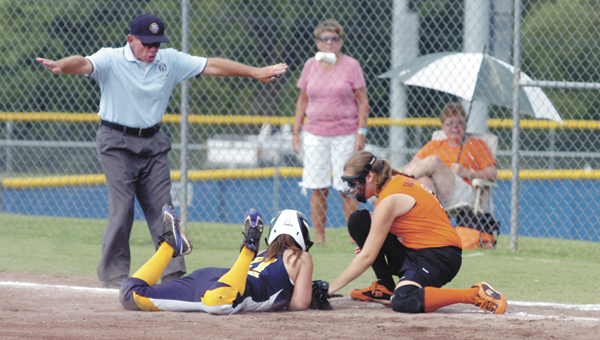 The team from California eliminated Fern Creek, Ky., with a 14-7 win in a key loser’s bracket contest Monday night in the 2011 Babe Ruth 12U Softball World Series.

Lodi coach Marty Morfey said the girls connected well with their bats, and noted that his team has scored 24 runs in the last two games.

“We just came out swinging the bats tonight,” Morfey said. “We’re finally starting to dial in and hit the ball.”

Morfey said the “keys” for tonight’s game lay in pitching and hitting.

“Pitching and keeping our bats rolling,” he said. “We’ve just got to keep hitting the ball the way we’re hitting it right now.”

In earlier action Monday, Fern Creek beat Othello, Wash., 8-4 to give the team from the Pacific Northwest its second loss in the double elimination portion of the tournament, and Lodi beat Hazlet, N.J., 10-3.

Lodi scored 14 runs on 13 hits in its win over the team from Kentucky Monday night.

Lodi jumped out on Fern Creek early in the first inning with five quick runs. Fern Creek answered with one run in the bottom half of the inning.

California took an 8-1 lead in the second inning, but things got interesting in the bottom of the third inning.

Fern Creek’s Madison Williams hit a three-run home run, and Taylor Childress drove in two runs on a double to make the score 8-6.

Williams ended the night 2-for-3, also hitting a single.

Morfey said this is his sixth year as a softball coach in the World Series and he never saw a girl hit a home run, until Monday.

“That was the first bomb I’ve seen hit in this age bracket,” he said. “It was an unbelievable hit.”

Mariah Mendoza allowed two runs on five hits and struck out five in the win.

Jennifer Leonhardt was 2-for-4 with two singles and two RBIs to help lift Fern Creek over Othello Monday.

Kristen Smith and Madison Williams were 1-for-4 each with one RBI each for the team from Kentucky.

Othello got down early, as Fern Creek took a 4-0 lead after the second inning. Fern Creek added three runs in the third inning to take a 7-0 lead.

Othello scored two runs each in the fourth and fifth innings.

Othello’s Diamond Franco was 2-for-2 with two singles for the team from Washington state.

Williams allowed four runs on five hits and struck out four to get the win for Fern Creek.

Franco allowed three runs on four hits for the loss.

Additionally, Smith and Williams had one RBI each.

Fern Creek dropped to the loser’s bracket after a 7-5 loss to Lodi Sunday morning.

Three Lodi players had two hits each and drove in a combined five runs for the team from California.

Lodi opened up in the fourth inning, scoring 10 runs against Hazlet. The California team scored 10 runs on nine hits.

Hazlet’s Nicole Coppolino and MacKenzie Emery were 1-for-1 each for the Hawks.

Mariah Mendoza allowed one run on two hits and struck out one for the winon the mound.

Hazlet dropped to the loser’s bracket after a 7-1 loss to host team South Alabama Sunday morning.

Saturday’s World Series round up