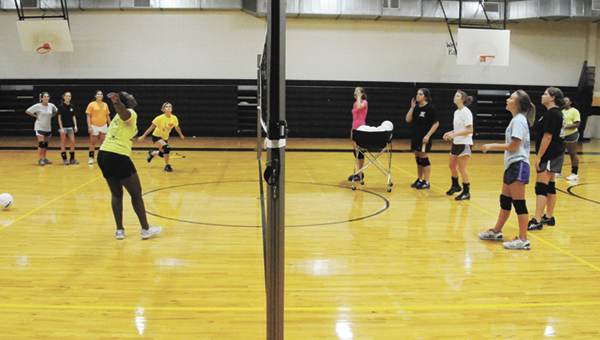 The Opp Lady Bobcats will get their season under way Aug. 18. | Andrew Garner/Star-News

After a summer of working hard on hustling and getting to the ball for the Opp Lady Bobcats, head volleyball coach Christie Spurlin said the team is ready to get started.

“Hopefully, we’ll win every game,” Spurlin said. “Mostly, I just want the girls to hustle and do their best. That’s all I ask of them to do — give it 110 percent every time they get out on the floor.

“I always tell them you either want to win or lose,” she said. “Do whatever it takes to win, that’s what we want to do.”

The Lady Bobcats are coming off a season where they advanced to the Class 3A South Regional Tournament. The varsity squad ended its 2010 season in the first round of the regional tournament.

Coming back this year are seniors Kourtnee Bradley and Andrea Shepard. Additionally, the Lady Bobcats will have four juniors and three sophomores on the squad.

Opp lost five seniors to graduation last year, but luckily its setter is only a sophomore, Spurlin said.

“We’re trying to rebuild the program back up,” she said. “My setter was my freshman (last year). She’s still my setter this year. Caiden Harrell will be our setter.”

Spurlin said there will be no changes made to the team’s offense or defense. The Lady Bobcats will still run out of a 5-1 on defense, for example.

In the area outlook, the Lady Bobcats will be in Class 3A, Area 2 with Geneva, Luverne and Pike County.

Spurlin said Geneva is the team to beat this year, again.

“That’s who we faced in the area tournament (last year),” she said.

As far as goals and aspirations for the season, Spurlin said a high goal is to finish better than last year.

“Hopefully, we’ll get back in the regionals,” she said. “Our goal is to go back to state.”