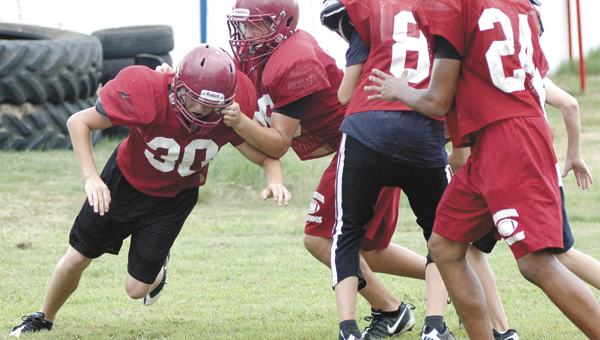 For the past two weeks, Andalusia and Opp, along with other local football teams, have battled the heat and sometimes the weather to get ready for their seasons, which are only days away.

Andalusia head football coach Brian Seymore said his players are getting down the “basics.”

“It’s gone well,” he said. “Our kids have acclimated to the heat pretty well. We’re going steady at 3 o’clock every day. We’re trying to get through in two hours, and 15 minutes.”

Additionally, Seymore said the tempo of practice is up beat, and the players are moving around and being more attentive.

“We’ve got a little bit of rain,” he said. “But, I’ve been happy with the overall attitude.”

With the start of football practice after a long summer of work outs, comes days when the team experiences ups and downs.

“We’ve had some good days and bad days,” Opp head football coach Jack Whigham said. “We’ve had a few more bad days than I’d like to have, but we’re really inexperienced, as you know.”

Whigham said the players can practice all they want to, but “there’s nothing like game-time experience for kids to understand.”

However, Whigham did say that some good things have come from the defensive and offensive sides of the ball.

“I think our defensive line has played well,” he said. “Better than what we’ve (coaches) expected.

During practice, teams will split up into different groups, whether it be with offense or defense.

Then, after about 15-20 minutes, the players will run through different plays for coaches to get a good “look” at what’s being shown.

Seymore said utilizing the younger players on the team has helped them get better the last couple weeks.

“We try to get our young guys on offense and defense to get good looks,” Seymore said. “That’s how we get better. I think what we’re doing is creating a lot of depth in a lot of positions.”

But, in the end, the players are focused on one thing, Seymore said.

“I think they’re focused on next week in preparation for Luverne (for the jamboree game),” he said. “We’ve got a job to do, and I hope we go out there and try to get better every day.

Opp will play host to W.S. Neal next Thursday night in a jamboree game. Kick off is at 7.