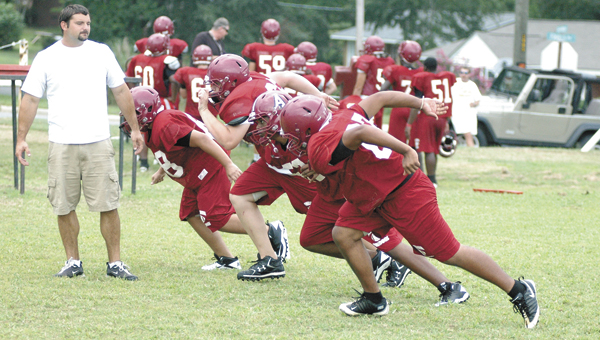 The Andalusia Bulldogs will debut a much-improved and much stronger offensive and defensive lines this season, said coaches Marcus Taylor and Earnie Ragland.

Taylor, the Bulldogs’ offensive coordinator and line coach, said the line has done a good job “competing” since the start of practice.

“All of them have a certain competitiveness about them,” he said. “These are the guys that have played in these positions for a long time.

“They’ve continually gotten better at it,” he said. “Every year, they’ve improved. Not only have they improved physically, but mentally as well.”

Quincy Thomas has been named the center for the Bulldogs, Taylor added.

Ragland, the defensive line coach for the Bulldogs, said he is “blessed to have nine guys that can play at the line position anytime on the team.”

“We are much improved from last year,” Ragland said. “Right now, I’ve developed some depth.

“The experience is a lot better,” he said. “I think we’ve got a pretty good core group. We’ve been working pretty hard on the fundamentals, mainly shooting our hands. Even though we are better than last year, in my opinion, we’ve still got a long way to go.”

After more than two weeks of practice and on the cusp of a jamboree game Friday against Luverne, Ragland said he is “pleased” with where the defensive line is right now.

“I think Sam, Montel, Nick and Catlin — all of them are doing a good job,” he said. “We moved Jahkelus and Stewart Studstill from offense. They’ll also get reps on defense.” 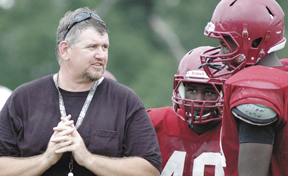 Ragland said that Peacock didn’t get any playing time last year, “but has come a long ways, and that Randy will see some playing time.”

What’s really astonished Taylor about his group of guys on the offensive line is their “character,” and how they are able to go out there everyday willing to get better at practice, he said.

Ragland has a similar assessment about his boys.

Finding a leader in a position not many players want to play can be hard to find for many teams, but that’s not the case for the Bulldogs as Raines and White have stepped in leadership roles for the team, Taylor and Ragland said.

“(Raines) played there longer than anybody else,” Taylor said. “He actually played in his first game as a freshman there. Because of that, and just because of his character, he’s one of those guys watching and telling other guys where to block. As a coach, that’s an awesome thing to have.”

Ragland said White is a leader on both sides of the ball, which has enabled others to step up and take on that role on the defensive line.

“Nick’s always been a leader. He plays at 100 mph on both sides of the ball,” Ragland said. “Sam Byrd and Montel Lee both have stepped up, too.

“I don’t think it really matters which three I have out there,” he said. “I have nine guys I don’t have a problem starting at all. I really enjoy coaching them.”

The Opp Bobcats will kick off its preseason with a fresh new look to its stadium tonight. For the past... read more