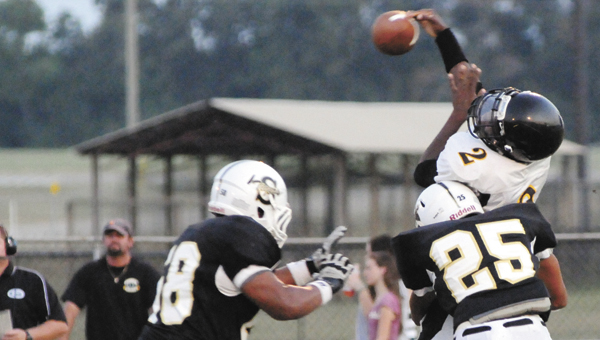 Straughn’s Chase Short and Zack Turvin combined for 230 yards rushing and scored four touchdowns to help lift the Tigers to a 40-21 victory over Geneva Friday night at Tigers Stadium.

Short, a junior running back and utility player, rushed for 109 yards on 12 carries and scored two touchdowns from 41 and 6 yards out.

Turvin, a senior quarterback, rushed for 121 yards on eight carries and scored two touchdowns from 9 and 69 yards.

Straughn’s defense held Geneva’s offense at bay in the first half, only allowing two first downs and 84 yards.

“We did some things well, and some things not so well,” SHS head football coach Trent Taylor said. “We kind of expected that. We know we’re a young football team, and even offensively there, we got the ball in the end zone and drove the ball, and that was impressive.

“Then, we got the turnover and were able to turn that into points,” he said. “Still, there were some things that didn’t look sharp.”

The Tigers improve to 1-0 overall, and will travel to play St. James next Friday night in Montgomery to begin their region play.

On their first offensive possession, the Tigers ran an 11- play, 58-yard drive which culminated with Turvin’s touchdown from nine yards with 6:32 remaining in the first quarter.

On the Panthers’ first offensive drive, Straughn senior William Worley got a big hit on Geneva’s Brian Sledge-Howe to cause an interception, which senior Dakota Hall scooped up to help the Tigers advance down the field for another score.

Straughn made the game 12-0 after a four-yard touchdown rush by Keith Edgar with 4:09 left in the first quarter.

Nine seconds later, Straughn found itself with the ball again because the Tigers recovered a fumble at the Geneva 49 yard line.

The Tigers only passed the ball one time Friday night.

Turvin found sophomore receiver Justin McCormick from 27 yards out, and McCormick scrambled and hit the end zone with 2:34 left on the clock.

Short’s point-after attempt was good and Straughn took a 19-0 lead.

Short got his first rushing touchdown of the night on Straughn’s first offensive possession of the second quarter.

Bobbing and weaving through Geneva defenders, Short found the open field and cruised 41 yards for the score to make it 26-0.

Turvin, who finished the night 1-of-1 for 27 yards and a touchdown, scored his second rushing TD from the 69-yard mark with 5:50 left to play in the first half.

Geneva got on board with 3:54 remaining when Kyle Porter rushed 37 yards for the score.

To start the second half, the Tigers scored their only touchdown on their first offensive possession in the third quarter.

Geneva then found holes in Straughn’s defense and scored on a 31-yard rush from Porter, and an 84-yard pass from Sledge-Howe to Jordan Dudley.

The Tigers’ defense didn’t back down late in the game.

Straughn’s Austin Worley caught an interception to end the game with 2:08 left on the clock.

“I’m proud of these kids,” he said. “I’ve been doing this long enough to know now that a win is a win. You just take them one at a time, and I’m proud we got one. “We’ll get ready for the next one,” he said.