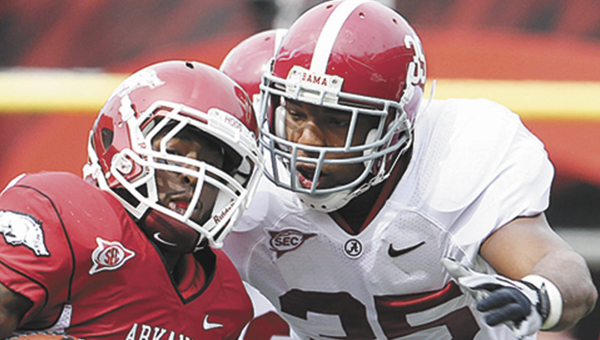 Alabama junior linebacker Nico Johnson said that the team will focus on establishing its identity this week in its opener against Kent State University. | Courtesy photo

Alabama junior linebacker Nico Johnson said Saturday’s season-opener against Kent State University will determine what the Crimson Tide’s identity will be for 2011.

Alabama enters the season ranked No. 2, behind Oklahoma, and many sports enthusiasts say the Crimson Tide will be able to contend for another national championship.

Johnson, an Andalusia native, said the team had a good week at practice in its preparation for KSU.

“We respect them very well,” he said. “I worked with a couple of (KSU’s players) when we helped build a House of Hope (in Tuscaloosa).”

When asked what Alabama head football coach Nick Saban has stressed to the team this week, Johnson said it all has to do with “first impressions.”

“He tells us the first impression is your last impression,” Johnson said. “We want to set a good impression (for the rest of the season).

“We want to start off good like we did last year, but this year, we want to finish strong,” he said.

Johnson said he’s eager to get back on the field at Bryant-Denny Stadium.

Kick off for tomorrow’s game will be at 11:21 a.m. CST, and will be broadcast on the SEC Network.

Bryan to start against Clemson

Troy junior and Andalusia native Brannon Bryan will start at the “Will” linebacker slot as the Trojans travel to take... read more