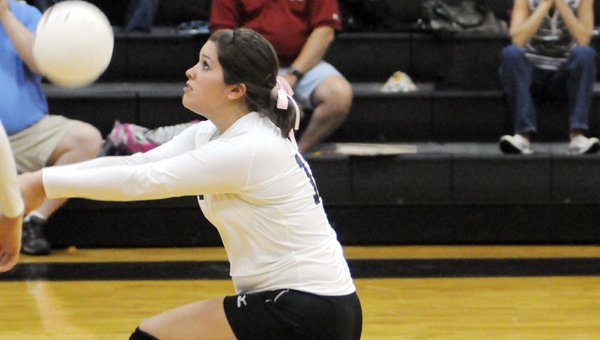 “It was exciting,” OHS coach Christie Spurlin said about game two. “They played well. They played hard and worked hard together.”

Opp’s only win of the match came when the Lady Bobcats battled the majority of the game, holding the lead over the Lady Bulldogs.

The Lady Bobcats went on an early 4-0 run in the second game, and both teams went back-and-forth, keeping the scoring close to within two points.

When the match got back to business, the Lady Bulldogs dominated the rest of the way, taking an early 8-2 lead in the third game, and putting the game away with a 22-15 lead to where Opp couldn’t recover.

The Lady Bobcats will travel to play Geneva in area action tomorrow. The junior varsity squad begins at 4:30 p.m.

In other action Tuesday night, Red Level beat Florala 3-1, and Straughn fell to Carroll-Ozark 2-1. The Lady Tigers’ final match against Geneva was not complete when the Star-News went to press.