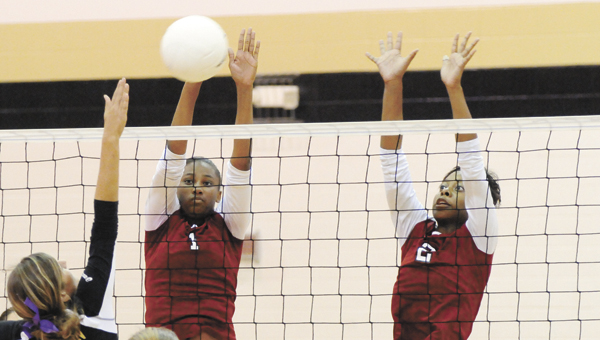 The Lady Bulldogs walked away with three-game sweeps over Headland and the Lady Tigers, and the host teams’ only win came against the Lady Rams to finish the night 1-1.

This was Andalusia’s first area tri-match of the season, and Lady Bulldogs’ top hitters Alison Daniels and Shi’Amber Townsend combined for 51 kills.

“My boxes worked,” AHS coach Angie Grimes said. “Our passing was much better.

“Our passing is on target, and it was good to get our area started off right,” she said.

Straughn’s Megan Johns had 14 kills in the Lady Tigers’ win over Headland.

“I hate to say it, but we didn’t have the intensity that we needed (against Andalusia),” Tracy said. “We played as well as we could’ve against Headland. I was hoping that it would carry over to Andalusia.”

Andalusia improves to 2-0 in area play, while Straughn is at 3-1.

The Lady Bulldogs will play host to Class 6A’s Northview next Tues., Sept. 13, at 4 p.m. Straughn will travel to play Zion Chapel in Jack next Tuesday at 4 p.m.

Throughout Andalusia’s final match of the night, the Lady Bulldogs tipped the ball over the net, where they found holes in Straughn’s defense.

In game two, the Lady Bulldogs didn’t get off to a good start, suffering a serving violation to go down 1-0.

Straughn kept up with Andalusia in the early going in game two, but fell behind 20-6 late, capping a 10-0 run for the Lady Bulldogs.

Andalusia sealed the win over the Lady Tigers with late 5-0 and 3-0 runs.

Straughn trailed 14-8 on an early first-game start by the Lady Rams, but the Lady Tigers bounced back scoring points off Bonds blocks.

With Fussell at the service line, Straughn tied the game 22-22, and the game remained close until consecutive kills by Johns late netted the Lady Tigers the win.

Straughn had two 4-0 runs in the second game, and held on late for the win.

The Lady Bulldogs went on a tear with the Lady Rams, going up on a 12-0 run in the first game with McGee at the service line.

Daniels and Townsend traded kills back and forth in the first game, and it carried throughout the match.

McGee had 20 service points, and three aces, Daniels and Townsend had 14 kills each.

Bordered by three-foot pieces of tape adjacent to the volleyball net is a square marking where the setter receives the... read more