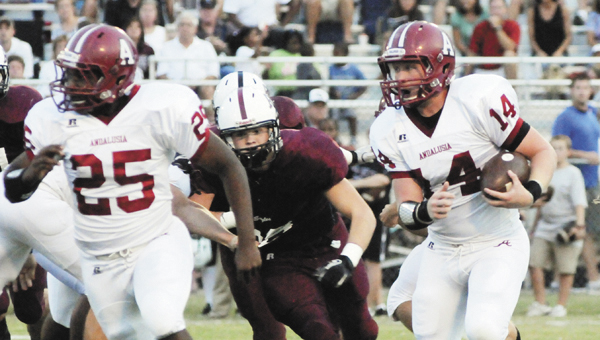 Andalusia pulled ahead 28-0 at the half, and the Bulldogs held St. James to 14 points in the second half to get a 52-14 region victory Friday night at home.

“I think our offensive and defensive lines set the tone for the whole game,” Seymore said. “Both of them came out and controlled the line of scrimmage on both sides of the ball.”

“Our defensive coaches had a good game plan in against the Duncan kid,” Seymore said. “We sized it up a little bit. The kids on both sides of the ball did a tremendous job.

“I really challenged our kids from the start of the game, and I felt like our kids really lived up to the challenge,” he said. “They played physical and fast.”

Seymore said the defense stepped up again Friday night because of St. James’ presence inside the box.

Andalusia senior linebacker Jacard Townsend led the Bulldogs in tackles with seven and two assists. He also had six carries for 73 yards and two touchdowns on offense.

On extra points, Courey Hopkins was 2-of-2 for the Bulldogs.

Seymore said it’s good to be where the team is right now in region play.

“It was good to get back in front of the home crowd,” he said. “They were real enthusiastic.

“Our kids really were prepared to play,” he said. “They came out and set the tone of the game. We’re two-and-oh in region, and we have a big week for homecoming next week. I’m happy with where we’re at right now.”

Andalusia improves to 3-0 overall, and 2-0 in Class 4A, Region 2. The Bulldogs play host to Bullock County next Friday night for homecoming.