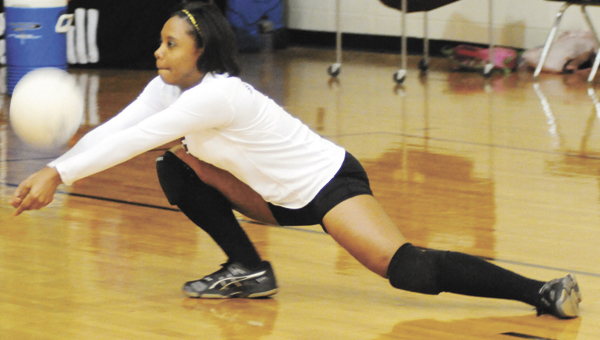 Andalusia’s junior varsity squad made quick work of Northview in the first match of the evening with a 2-0 sweep. The JVs won 25-13, 25-15.

“They were just finding holes in the court,” Grimes said. “They were really good and really smart. They were putting a lot of pressure on the setter to make her get the first hit.”

The Lady Bulldogs trailed from the get-go, but tied the game up at 3-3 and went on two short 3-0 runs.

Northview came back and took a 10-9 lead, which led to an Andalusia time out.

From there, the Lady Cougars took leads of 15-11, 18-12 and 23-14 executing at the net and from the service line to put the opening game out of reach for the Lady Bulldogs.

Andalusia trailed 4-6 to Northview after giving up an early 2-0 lead.

On a call made by the referee, Andalusia’s Shi’Amber Townsend earned a yellow card, which gave the Lady Bulldogs needed momentum, despite the second-game loss.

Northview went back out on a lead and led 11-9 over the Lady Bulldogs before they tied the game up 12-12 at the mid-way point.

The Lady Bulldogs held a steady lead late in the game, but Townsend hit the floor hard on her right knee, which brought her out of the game and the rest of the match. Grimes said Townsend didn’t go to the emergency room Tuesday night, but would have her knee examined this morning.

Andalusia led 20-18 at that point, but Northview came back and went on a 5-0 run to win the game.

Andalusia teared itself out on a hefty 6-0 lead at the start and held the lead throughout the game.

The Lady Bulldogs led 14-8 and 15-11 before Northview came within threatening distance creeping to a 15-15 tie.

However, Andalusia closed the game out leading 21-16 to put the game away late.

Northview took the lead early this time, and never gave it up in the final game of the match.

Alison Daniels had nine kills and Townsend had five kills.