Focused on the Hornets 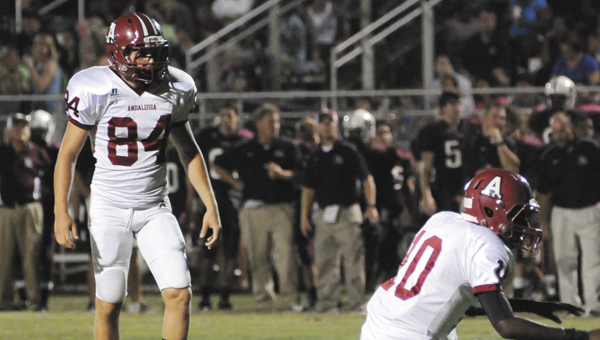 Andalusia’s Courey Hopkins (84) focuses while he waits on the hold from Jalen Cross (10) on an extra point during the Alabama Christian Academy game. | Andrew Garner/Star-News

He isn’t looking past Bullock County this week, as the Bulldogs will play host to the winless Hornets tonight for homecoming.

Instead, Seymore said the focus this week is the same as the past three weeks of the season — “getting better.”

“That’s pretty much the focus every week,” Seymore said. “We’re going to try and get better each time we get out there. We want to always have a good week of preparation and look at each opponent.”

Bullock County fell against Headland 46-0 in its home-opener.

During last week’s victory over the Trojans, Andalusia’s offensive and defensive lines set the tone during the contest.

In the back field, defensive backs weren’t always in position or were not following their assignments, Seymore said.

Tonight, Seymore said he’s looking for the offense to keep doing what it does, and for the defense’s response in the back field because of Bullock County’s true spread offense.

“They’ve got some big receivers and could pose some match up problems,” he said. “I’d like to see us work really hard this week with our coverages and make sure we stay consistent.

“Offfensively, we’ll mix the run up a little bit,” he said. “Both quarterbacks (C.P. Rogers and Michael McCalman) will play. We want to establish a little more depth in receivers and running backs.”

Another positive from last week was the coverage teams on punt and kick off returns, Seymore said.

We stayed in our lanes, and played assignment football,” he said.

Before the game begins tonight at 7 at Bulldogs Stadium, the team will participate in the annual homecoming parade this afternoon downtown.

Seymore said after the parade, the players will rest a little bit and hopefully will get refocused on what’s ahead.

“I still believe our kids are more experienced (in dealing with destractions),” Seymore said. “The focus is the game at 7-o’clock on (tonight), and that’s what homecoming’s all about.

“I think our kids will be ready, mentally and physically on the field,” he said. “There’s nothing that says (Bullock County) can’t make the big plays. I just hope we come out mentally prepared.”

Andalusia’s Brandon Smith has been cleared to play after suffering an MCL sprain. Seymore said he will be held out this week, and Tyler Raines will assume the long-snapper role on the team.

Joe Flowers is a game-time decision on a high ankle sprain, Seymore said.

Opp's T.J. Register makes a pass during the preseason game. The Bobcats will play Geneva on the road tonight at... read more