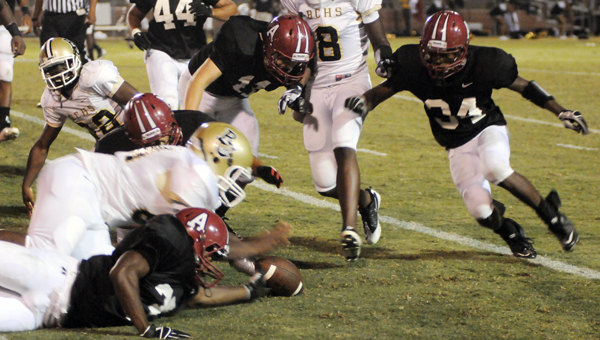 Andalusia didn’t allow any points in the second half, senior tail back Jacard Townsend and junior tail back Javonte Johnson scored two touchdowns each and the Bulldogs walked away with a 44-9 region win over Bullock County Friday night for homecoming.

Andalusia senior tail back Lakelyus “Fathead” Adams added a third touchdown on the ground and a two-point conversion for the Bulldogs in the win.

“There’s some things we’ve got to shore up,” Seymore said. “We’ve got to be more effiicient on offense and not have so many dropped passes.

“Defensively, we’re still blowing some coverages,” he said. “We didn’t do a good job of tackling.”

The Bulldogs improve to 4-0 overall, and 3-0 in Class 4A, Region 2. Next week, Andalusia will travel to face Class 3A’s T.R. Miller, currently ranked No. 7 in the state, in Brewton. The Tigers are 3-1 after a 62-14 region victory over Montgomery Academy last night. The Tigers from Brewton gave Andalusia its only regular season loss last season.

During Friday night’s game, Bullock County executed a couple of fake punts on the Bulldogs.

Seymore said they recognized it from film, and the team didn’t execute.

The Bulldogs’ also had a passing touchdown from sophomore quarterback Michael McCalman.

Andalusia deferred to the second half at the start of the first quarter, and immediately got a three-and-out against the Hornets.

Five plays later, Adams scored his first touchdown from 41 yards, running through a few defenders on the left side. Adams also got the two-point conversion to put the Bulldogs ahead 8-0.

Andalusia got the ball back on offense after senior Will Harrison intercepted Bullock County’s Darren Beachem pass from the Hornets’ 36-yard line.

From 11 yards out, the Bulldogs executed a four-play drive that ended with a Townsend 4-yard touchdown rush with 6:35 remaining in the first quarter. Andalusia senior C.P. Rogers rushed from three yards for the two-point conversion and the Bulldogs led 16-0.

With a comfortable lead in their pockets, the Bulldogs allowed Bullock County to score its only touchdown of the night on the Hornets’ next offensive possession.

Andalusia would not hold the ball long at all on its next offensive possession. The Bulldogs fumbled the ball at their own 19-yard line and Bullock County recovered on Andalusia’s 11-yard line to set up great field position.

However, Andalusia’s defense stepped up and held the Hornets to a 37-yard field goal, and the Bulldogs led 16-9 with more than two minutes left in the first quarter.

On the Bulldogs’ next offensive possession, Townsend scored his second touchdown of the night from 76 yards out. Townsend rushed for 83 yards on four carries for the Bulldogs.

Courey Hopkins’ extra-point attempt was good and the Bulldogs went ahead 23-9 with 1:43 in the opening quarter.

Andalusia added its final touchdown of the first half with 7:30 remaining in the second quarter.

Johnson would score his first touchdown from six yards, and Hopkins made the PAT to put the Bulldogs ahead 30-9.

Andalusia had some ball control problems late in the first half, but the Bulldog defense held the Hornets at bay.

The Bulldogs came out at the half, and they meant business.

McCalman would connect with junior receiver Zach Ward from 28 yards, and the PAT was no good from Hopkins.

On the ensuing kick off, Andalusia’s Deiondre Velazquez knocked the ball out and freshman Cameron Woods recovered the fumble.

From there, Johnson scored his second touchdown from six yards and Rogers added the two-point conversion to end the scoring for the night.

With 7:35 remaining in the fourth quarter, Andalusia’s Hiren Patel intercepted Beaman’s pass to give the Bulldogs the ball back.

Adams rushed 75 yards on three carries, and Derrick Dorsey rushed 60 yards on nine carries late in the game for the Bulldogs.

Andalusia junior linebacker Ethan Jones and Townsend led in tackles with six each.

Seymore said he knows the players will come out looking for a win next week in Brewton.

“We got a win and got out with no serious injuries,” he said. “I know our kids will come out next week and they’ll respond. It’s a big week because it’s T.R. Miller, a team that was the only one that beat us in the regular season.

“I know our kids have something to work on,” he said. “We’re going to their place with an opportunity for some pay back.”

­Red Level began Friday night winless, and at halftime, it looked as if they’d end the game the same way.... read more