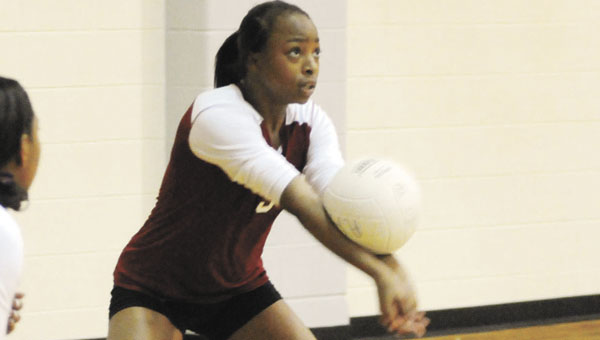 “I know we do play Opp (today) and we’re focusing on them,” she said. “Everything we do is about getting better each and every game as a team. We’ll just continue to do that.”

The Lady Eagles went on a 6-0 run midway through the first game to cruise past Andalusia for an early 1-0 lead.

Grimes said PCA is one of the best teams her team will face this season.

“Providence Christian and Enterprise are going to be the top two teams we’re going to play,” she said. “We need to play them.

“Our game plan was to block (against PCA),” she said.

Providence Christian’s play at the net, tipping balls over and killing from the edges mauled the Lady Bulldogs’ play.

However, trailing 7-21 late in the third game, Andalusia went on a short 4-0 run to indicate they weren’t finishing without a fight.

The Lady Bulldogs will play the Lady Bobcats tonight at OHS. The junior high teams will begin at 4 p.m.

Andalusia’s PeeWee Bulldogs utilized its balanced attack against Opp Saturday night, and walked away with a 33-6 victory over the... read more