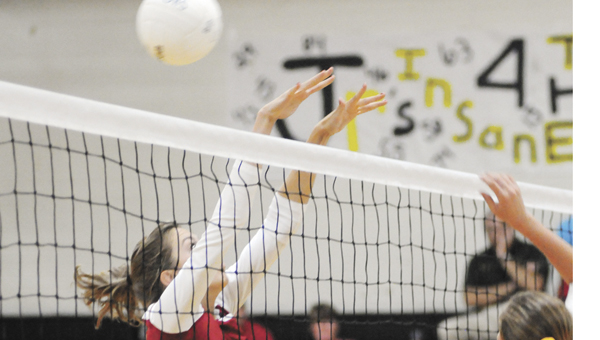 Andalusia and Opp met in volleyball action at OHS, and the Lady Bulldogs claimed a 3-1 victory over the Lady Bobcats.

Throughout the match, the Lady Bulldogs showed their power and strength, while the Lady Bobcats exhibited a don’t give up style of play.

In spite of the win, AHS head volleyball coach Angie Grimes said the girls need to work on staying in control of the match.

“We have the problem of losing our momentum,” Grimes said. “That’s one thing we’ve got to practice on — finishing these games.

“Other than that, we had some great arm swings,” she said. “We lost the ball going out, but that’s OK.”

Andalusia pulled away late in the first game, but the Lady Bobcats crawled back going on a 4-0 run to make it a 24-24 tie.

The tail end of the first game went back and forth for both teams.

Andalusia’s Alison Daniels, who led the Lady Bulldogs with 14 kills, got the final say-so in the first game, nailing a kill on the backside of Opp’s court.

“I think they hustled well,” OHS head volleyball coach Christie Spurlin said. “We’ve just got to work on blocking. We tried to adjust to their hitters.

“Mostly, she (Daniels) was hitting them down the center,” she said. “We just made mistakes, like passing the ball to the net. We’ve just got to work playing at the net better.”

Andalusia hopped out to a big 5-0 lead early in game three, but the Lady Bobcats answered tying the game at 11-11 at the mid-point.

The Lady Bulldogs won the match with Opp on serve at 18-24.

In the deciding game, Andalusia went on a 6-0 run to lead 12-3 with the help of Meredith Tillman. Tillman finished with six blocks for the Lady Bulldogs.

Tillman helped finish a 7-0 run for Andalusia, but Opp got back on serve at 4-13.

Andalusia had to break serve seven times before getting the final game win.

Kenna Edmondson and Omarria McGee had three aces each and Shi’Amber Townsend had five blocks.

Andalusia will to Headland to play the Lady Rams and Ashford in an area tri-match tomorrow. The Lady Bulldogs will begin play at 4 p.m.

Opp will play host to Straughn tomorrow at 4 p.m., starting with the junior varsity squad.

RLS to play in ‘big game’