What football’s all about 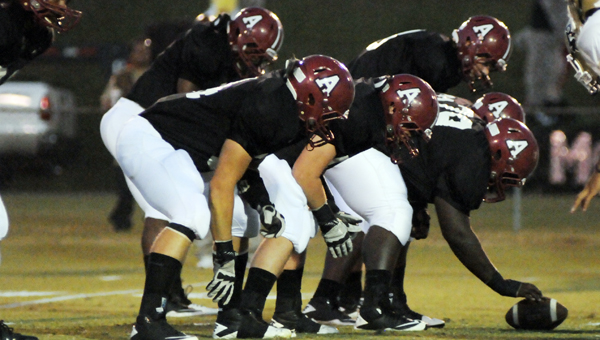 “It’s what Friday night football is all about. It’s two quality football teams getting together with coaches matching wits, and players out there playing a physical football team.”

That’s how Andalusia head football coach Brian Seymore described this week’s regular season match up between his Class 4A No. 7 Bulldogs and the Class 3A No. 8 T.R. Miller Tigers.

Andalusia enters this week’s contest with a 4-0 record, while T.R. Miller will play with a 3-1 record.

“There’s no doubt they’re a very good opponent,” Seymore said. “They will be the toughest opponent we’ll face so far (this season). There’s no question about it.

“(T.R. Miller) Coach (Jamie) Riggs has been there 20-plus years,” he said. “They’ve got a sound — a pretty consistent football program. They have made multiple title runs and multiple region championship runs.”

Last week, Tigers running backs MacHenry Coleman and Randy Davis ran for more than 100 yards each in their rout over the Eagles in Montgomery.

Coleman ran for 129 yards on nine carries, and Davis had 103 yards on five carries.

T.R. Miller had 442 total yards rushing and 46 yards passing from its quarterback Kevin Davis, who had two touchdown passes.

On defense, the Tigers paced the Eagles to only 273 yards of offense — 177 yards rushing and 96 yards passing.

In Andalusia’s game last week against the Hornets, Jacard Townsend, Javonte Johnson and Lakelyus “Fathead” Adams combined for a total of 288 yards and five touchdowns to help lead the Bulldogs to the victory.

Seymore said he feels pretty good about how the players match up with T.R. Miller on both sides of the ball.

“I think we’ve got kids that can match up against them and match their size up front because they’ve got some big guys on the offensive line,” he said.

Seymore added that his special teams play has to step up this week.

During the 2010 season, Andalusia suffered its only regular season loss to the Tigers at home, falling 22-6.

Seymore said tomorrow night’s game has been “circled” since before the season.

“They soundly beat us in the physical aspect of the game,” Seymore said. “I think they got the better of our guys last year. A lot of these guys have something to prove. It’s very important to our kids.

“T.R. Miller is the next team to beat to have an undefeated season,” he said. “Even though it’s a non-region game, there’s a lot at stake for these seniors and the football team.”

Leading up to the game, Seymore said practice has been really “good” this week.

“I’ve felt the kids have been focused, and are paying attention to detail,” he said. “They’re really watching extra film. It’s going to come down to execution on the field and eliminating those mistakes. That’s what you’ve got to do against a quality football team.”