Wildcats to tangle with Blacksher 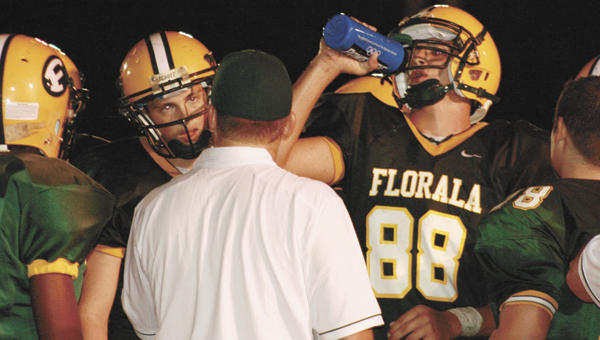 Florala has been focusing on itself and trying to get better, head coach Justin Jones said. | Stephanie Nelson/Star-News

After four weeks of the regular season, the focus is still the same for the Florala Wildcats, head football coach Justin Jones said.

“We’re still trying to work on us,” he said. “I mean no disrespect to anybody else. We’re trying to get us better.”

Tomorrow night, the Wildcats will play host to J.U. Blacksher, who is also 0-4 on the season.

Last week, Florala lost 14-13 to rival Pleasant Home, and Jones said the loss taught the kids a lot about having opportunities to win.

“For our kids, they were hurt. They were hurt because they were so close (to winning),” he said. “We had opportunities, and if we had capitalized on them, it would’ve been a totally different outcome.”

However, Jones did say the coaches were “proud” of the players last week.

“We were proud, but we weren’t pleased with the outcome,” he said. “We hope our kids respond better this week, and we’ll see where that takes us.”

Florala running back Austin West will be out for three weeks due to an ankle injury.

Jones said that he has plenty of replacements to fill West’s spot.

Andalusia still No. 7 in poll

Andalusia still remains in the No. 7 spot in Class 4A in this week’s Alabama Sports Writers Association poll that... read more